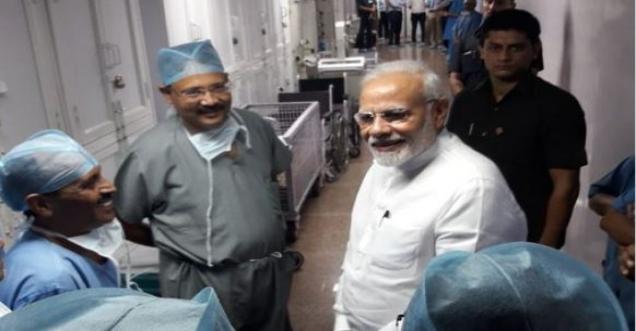 Brief Outline: A Photo Of PM Modi, where he can be seen laughing is viral on the social media, the people who shared claims it too be from the AIIMS after the death of late PM Atal claiming to  after the Death of the former PM.

Facts Check Analysis: The image as shared on the social media claiming to be post the death of the late PM Atal Bihari Vajpayee is wrong. However the picture is from the AIIMS hospitals where the late PM was present.

Vajpayee was admitted to AIIMS in June this year. He passed away on Thursday August 16, 2018, at the age of 93.

In the picture the present PM Modi can be seen smiling with the doctors at the AIIMS has gone viral over the social media. The picture has been shared by the Congress and AAP supporting people, targeting the PM.

Prime minister Modi visited AIIMS several times a day of August 16, 2018. The doctor with spectacle who can be seen in the picture is Dr. Shiv Choudhary, Head, Dept. of Cardio-Thoracic and Vascular Surgery, AIIMS, Delhi.

THE 26th KRISHNA BHARADWAJ MEMORIAL LECTURE 2018 was delivered by Dr. Shiv Choudhary, Head, Dept. of Cardio-Thoracic and Vascular Surgery, AIIMS, Delhi on "Conquering the Invincible: A journey of courage" on Thursday, 08 March, 2018 at 3.00 P.M at JNU. pic.twitter.com/ZDPAygv1Om

Atal Bihari Vajpayee was alive when the photo was taken.

Prime Minister Narendra Modi leaves from AIIMS (All India Institute of Medical Sciences) where former PM #AtalBihariVaajpayee is admitted. He is on life support system. pic.twitter.com/q833ORbHpX 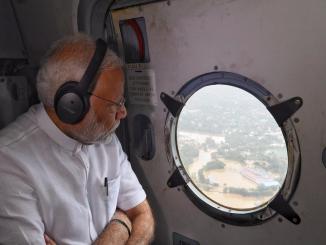