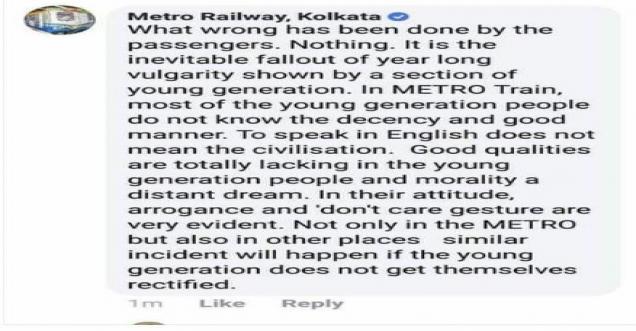 Origin: The post is viral on the social media.

Detailed Analysis: Initially the post was viral on the social media sites that the Metro Railway  Kolkata initially supported the couple being beaten, and came out in a facebook post and acted like a moral policing. Dear commuters, there is a fake post circulating in the social media claiming that Metro Railway supports the passengers who allegedly thrashed the couple. The fact is that Metro Railway, Kolkata, strongly condemns the unfortunate incident and is against moral policing.

The post was shared by many facebook users in different time line proving that the news was initially posted by Metro Railway kolkatta. But latter due to backlash and negative comments it was deleted from the facebook. However many social media users had already taken the screen shots of the actual message by the Metro Railway, Kolkata