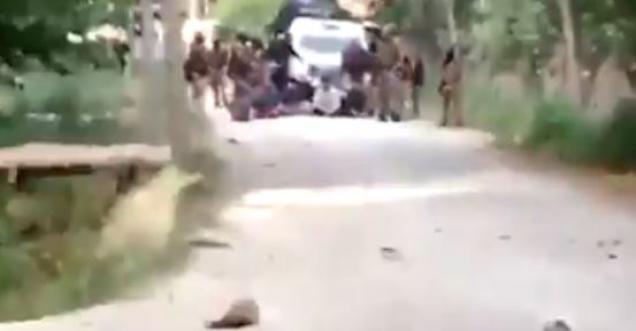 This is the latest video(16th August) of Jammu & Kashmir, suburbs of Srinagar where Indian Army used 4 detained Kashmiri boys as a human shield to “defeat” some stone-pelters some boys in jeans raising anti-India slogans and brave soldiers abusing them saying “throw stones now” 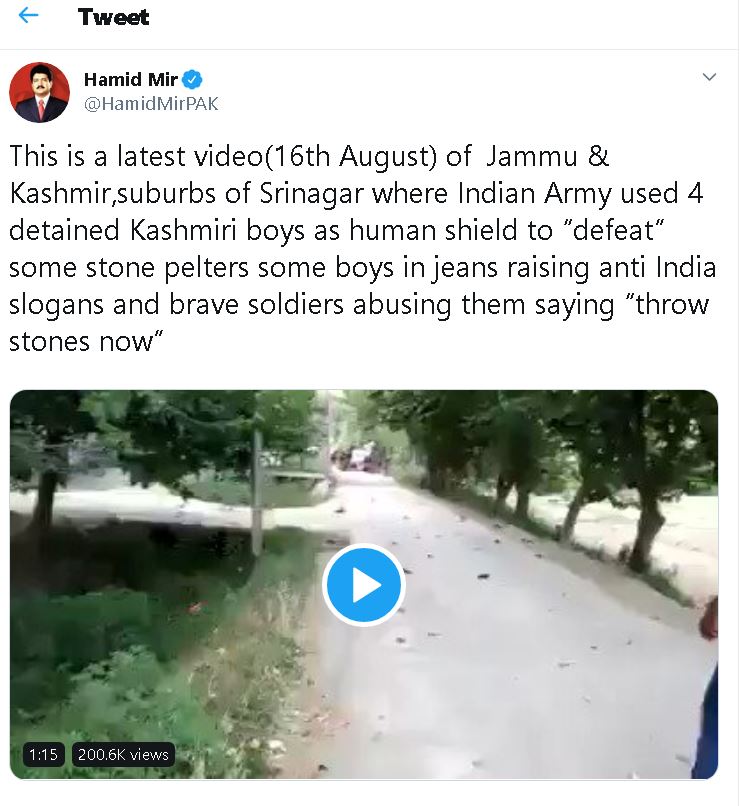 Facts Check Analysis: It looks like Pakistan and Pakistani based people are yet to recover from the humiliation at the United Nations Security Council (UNSC). As they have already started peddling fake news on social media. Hamid Mir a journalist from Pakistan tweeted video, claiming how Indian soldiers used 4 detained  Kasmir boys as human shield.  The video shared by Hamid is a year old video, not from the current situation which has risen in Jammu and Kashmir. The video is from June 2018, when a group of people were used as shield by the Indian Security forces in Kashmir. The Kashmiri boys were stone pelters, raising voice against India and abusing the Indian soldiers. As per ABP news published on Jun 19, 2018, “A video has surfaced lately on social media, in which it can be seen that Indian soldiers have forced four stone-pelting youths to sit before their vehicles to use them as a human shield.The incident took place during a cordon and search operation in Samboora village of Pampore on Monday.”

The same news was shared by many news and social media websites bask in 2018.  As per thekashmirwalla, news published on 18 Jun 2018, Group of civilians used as human shields in Pulwama.

According to the locals in Samboora Village of Pulwama district of South Kashmir, a group of youth has been taken as human shields by the government forces during an ongoing Cordon and Search Operation.

In a video, sent by a local from the areas, a group of youth can be seen sitting in front of the forces’ vehicle to stop other youth from throwing stones.

Hamid Mir is a Pakistani journalist, columnist and an author. Born in Lahore to a journalistic family, Mir initially worked as a journalist with Pakistani newspapers. He currently hosts the political talk show Capital Talk on Geo News. He writes columns for Urdu as well as English newspapers, both national and international. Other tweets showing when Hamid was more interested in spreading bias against India, than looking into Pakistan.