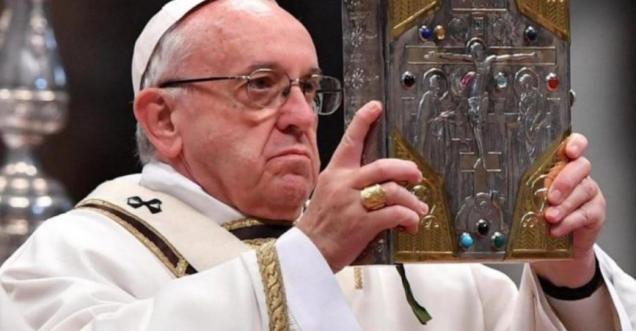 Viral Message: Pope Francis has responded to claims that many of his teachings “contradict Bible teachings” by saying that his words “overrule” anything written in the Bible.

Pope Francis has responded to claims that many of his teachings “contradict Bible teachings” by saying that his words “overrule” anything written in the Bible.

The pope has further angered traditional Christians in recent weeks by developing the habit of hiding the crucifix that is worn around his neck when speaking in public, causing many Christians to believe the pontiff is ashamed to display the powerful Christian symbol.

As reported by NBC News, the Vatican’s Commission for Religious Relations with Jews issued a major new document pronouncing that God had never annulled his covenant with the Jewish people, and so Catholics should not try to convert Jews: “The Church is therefore obliged to view evangelization to Jews, who believe in the one God, in a different manner from that to people of other religions and world views.”

Viral Message Verification:- No Pope Francis, did not Says His Words Overrule The Bible as claimed in the news by yournewswire.com. Something like this was only published on the similar on click-bait websites, we did not find any relevant information to make this statement verified.

Pope Francis 266th and current Pope of the Catholic Church, a title he holds ex officio as Bishop of Rome, and sovereign of Vatican City.

One of the beautiful quote by Pope Francis official twitter post as “Jesus made Himself like the grain of wheat that falls to the ground and dies to give life. Our hope springs from that love-filled life.”

Jesus made Himself like the grain of wheat that falls to the ground and dies to give life. Our hope springs from that love-filled life.

Yournewswire.com has produces many other news which turned out to be fake.