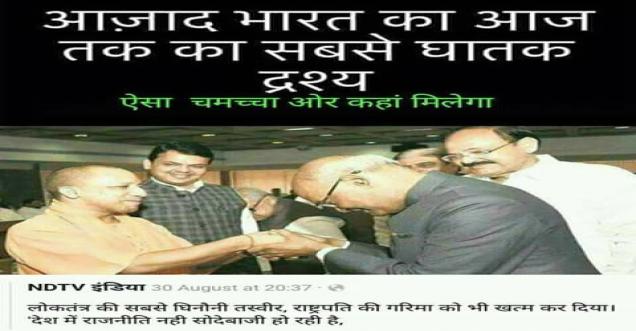 Confirmation by Ayupp.com – Image is real but that time Kovind was Presidential Candidate.

Ayupp Analysis: Before the Presidential elections in July, BJP had announced name of Ram Nath Kovind as the BJP candidate. At a function in Delhi, Kovind was seen shaking hands with Uttar Pradesh (UP) chief Minister (CM) Yogi Adityanath in full submission mode. It looked like Yogi is some real life God and Kovind is taking blessings from him. We can also see other big leaders of BJP in the picture. Check the articles published in Livemint, indian express and DNA. The above image was taken on 23rd July 2017 and Kovind was electedPresident on 20th July 2017 and he assumed office of President from 25th July.

However, this picture would have been objectionable if it was taken after Kovind became President. But at that time he was Governor of Bihar and it looks like they are having some fun time in the party meetings. Hence, as per the viral message, we cannot say that this image is of President of India.

We request people not to spread false image about the honourable President of India. 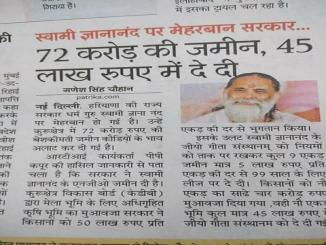