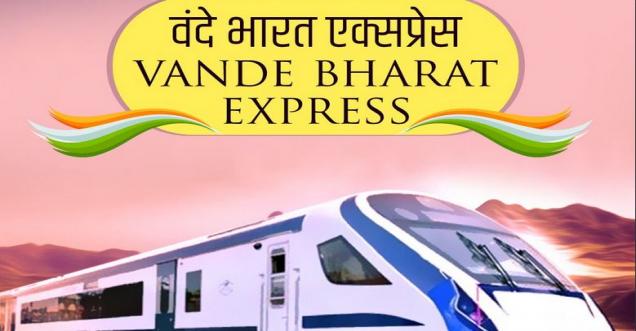 Facts Check: A Fake information regarding Train 18 has been renamed as Vande Mataram Express is not true, it is Vande Bharat Express.

A Fake message circulating in the social media claims that Train 18 -- the Indian Railways' fastest engineless train has been renamed as Vande Mataram Express, however the fact is that it is Vande Bharat Express.

The post has been shared on the facebook group page called Narendra Modi Whatsapp Group, which has more than 15 lakh followers.

Today, Minister of Railways & Coal, Shri Piyush Goyal announced the name Vande Bharat Express for Train 18, acknowledging its made-in-India status. He called it a ‘vandaniya’ step towards realisation of New India vision. This train set has been manufactured by Integral Coach Factory (ICF) in the period of 18 months under 'Make in India' program.

Since the launch of Rajdhani trains, Vande Bharat Express is the next major leap for Indian Railways in terms of speed and convenience. It is India's first semi-high speed train equipped with world class passenger amenities.

It can achieve high speeds (max speed of 160 kmph) due to faster acceleration & deceleration and will reduced journey time by 25% to 45%. Scheduled commute between New Delhi & Varanasi will take approximately 8 hours making it 40-50% faster than the fastest train currently connecting these two cities.

Vande Bharat Express incorporates many modern features which debut for the very first time on Indian Railways. It has been provided with ‘State of the Art’ passenger amenities like On-board wifi entertainment, GPS based passenger information system, CCTVs, bio-vacuum toilets, rotating chairs in executive class, etc. at par with global standards. It also has provision of Divyang-friendly facilities. It will have 16 coaches with Chair Car type configuration with 2 Executive Class Chair Cars and 14 Chair Cars.

Hon’ble Prime Minister Shri Narendra Modi has been requested to flag off this train. This is a momentous progress towards New India.