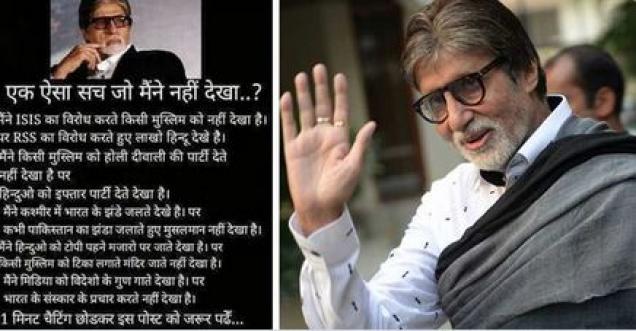 Brief Outline: Viral news on the social media quoting Amitabh Bachchan as his view on ISIS and causing disharmony among the people

Origin: This news was spread on whatsApp and other social media

Detailed Analysis:  Fake news on social media or say false market rumors are always hot. There are so many different rumors spread on the Whats App especially. For the past few days, a message is being shared on social media by the name of Bollywood superstar Amitabh Bachchan. In this message Amitabh Bachchan's photo has been taken and things have been said to spoil communal harmony. In such a way, as soon as Big B saw this message, he immediately turned to cybercrime while advised not to spread it.

Commenting on the message being circulated on social media, his team wrote on social media, "The official digital team of Mr. Amitabh Bachchan wants to make it clear that it is being shared on the Whatsapp app and many social media mediums. The content of the post is completely wrong. Neither Mr. Amitabh Bachchan nor any member of his digital team belongs to such ideas. Please do not forward this message to the users / fans forward and delete it. We have complained this matter to cybercrime officials and strict action will be taken against those who create such content. "

It is a fake news and Amitabh Bachchan never gave any such comment of view. Verify your fact check on ayupp.com before believing anything.