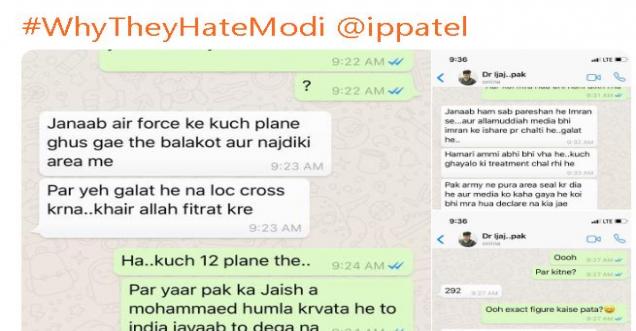 This information’s has been shared widely on social media; subsequently, they spread like a fire,

The post showing a burkha-clad man from Goa and a group of men roughing him up,it is being shared on the social media trying to project that this man was trying to defame Muslims by wearing Burqa.

The post can be viewed here and the archived version here.

A Pakistani pilot shot down by Indian Air Force Wing Commander Abhinandan Varthaman in Wednesday’s dogfight died after being beaten up by a Pakistani lynch mob, a London lawyer has claimed quoting close contacts in the Pakistan Air Force.

At times, the reality is stranger than fiction.

The PAF F16 Wg Cdr Shahzaz Ud Din of No 19 Squadron flying F-16s killed in action yesterday on 27 February was the son of Air Marshal Waseem Ud Din, DCAS (Operations) of PAF. IAF Wg Cdr Abhinandan (who is the son of an IAF Air Marshall) shot down the F16 flown by the son of the PAF Air Marshall before his own Mig 21 Bison was hit by Pakistani anti-aircraft gunfire and was downed and captured.

So two sons of Air Marshals fought it out mid-air up in the skies..... Wg Cdr Abhinandan (IND) in MIG & now Late, Wg Cdr Shahzaz Ud Din(PAK) in F-16. Both fell from the skies, one could not survive.

The sad part is that the Pakistani pilot who ejected in the Pakistani occupied part of J&K was hurt but alive when landed but was lynched (beaten mercilessly nearly to death) by the mob who took him as a fallen Indian. When it was identified as ‘our own man’ and taken to the hospital, he could not survive. Nothing can be more heartbreaking than the untimely termination of a young life. My heartfelt Condolences to the family of Shahzaz.

The Indian pilot is returning home tomorrow to his family. In a 2017 Bollywood movie, an Indian Air Force squadron leader jet is shot down and he ends up in prison in Pakistan. The character ultimately escapes and returns to his family. His father Air Marshal S Varthaman (Retired) was a consultant for the film. His son is returning home rather sooner but another AirMarshall was not that lucky.

Life is to cherish and not to be lost to the greed of politicians and creed of the generals. Only if Pakistan could stop following the 7th-century Arab terror theology these innocent brave sons of the Indian soil could live happily & in peace. It had the capacity but the continuous religious indoctrination and wahabisation, through the auspices of the junta has turned the country into a graveyard of rationality, reason and common-sense.

The subcontinent could have healed the wounds of the partition. But no attempt was made to make bridges. The region was which could have become a heaven on earth has been turned into a living hell due to the greed of a few.