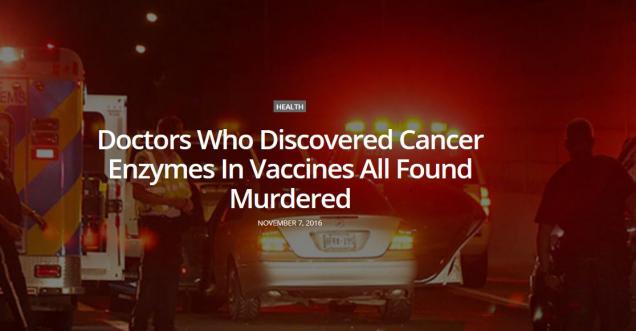 Brief Outline: The fake news claims that several holistic doctors have being murdered due as they found enzymes in vaccines and they were on breakthrough cure for cancer

Viral Example: Several holistic doctors have been found dead, in apparent suicides. The medical community is now speechless due to the timing of their deaths, based on the fact that they were all researchers working on a breakthrough cure for cancer.

Suspicions swirled that the doctor may have been killed as a result of his controversial research. Bradstreet and his colleagues had discovered that the immune system is being compromised by nagalase, which they suspected was being introduced through vaccines.

This new breakthrough cure, which you can learn more about in the video below, includes the human protein GcMAF (globulin component macrophage activating factor). GcMAF actually activates macrophages that are already existent inside of the human body, and in turn causes the body to destroy cancer  cells.

Detailed Analysis:  The news about Doctors Who Discovered Cancer Enzymes in Vaccines All Found Murdered was published back on Nov, 2016 (archived here) and ever since has been shared by more than 14 lakhs times.  Initially the news was posted by a website Neonnettle.com with headline "Doctors who discovered cancer enzymes in vaccines found murdered," on March 2, 2017. Several Facebook users flagged the story as potentially being fabricated, as part of the social media site's efforts to clear fake news from users' news feeds.

The theory lacks scientific evidence, though. The British government has warned against the purchase of GcMAF, since it is not licensed and its production does not adhere to production standards.  Scientific journals where those theories were published have retracted them, because they are not proven.

But we found little evidence that the deaths of doctors are were connected to the vaccine controversy.

Dr. Bruce Hedendal, a 67-year-old doctor in Florida, was found dead in his car in June 2015. The actual cause of his death is not clear, but natural causes have been cited by Florida local TV stations. Hedendal was a chiropractor, and there are no reports that he was involved in challenging the pharma industry in any way.

Another doctor from Florida, Dr. Theresa Ann Sievers, 46, was found murdered in her Florida home in 2015. An investigation found that her husband Mark had hired two men, Curtis Wayne Wright Jr. and Jimmy Rodgers, to kill her so he could collect insurance money.

Doctors' deaths were not connected, as fake news site claims

A fake news story tried to connect the random deaths of doctors with conspiracy theories around vaccination. Neonnettle.com posted a story headlined,"Doctors who discovered cancer enzymes in vaccines found murdered," on March 2, 2017. Facebook users flagged the story as potentially being fabricated, as part of the social media site's efforts to clear fake news from users' news feeds.

FACT CHECK: Were Doctors Who Discovered Cancer Enzymes in Vaccines All Found Murdered?

In just over a year, more than sixty holistic health practitioners have died suspicious deaths, and the media refuses to acknowledge that these deaths might be linked. False On 19 June 2015, a controversial doctor named Jeffrey Bradstreet was found dead in a river by a local fisherman from what the local sheriff's office later determined was a self-inflicted gunshot wound to his chest.