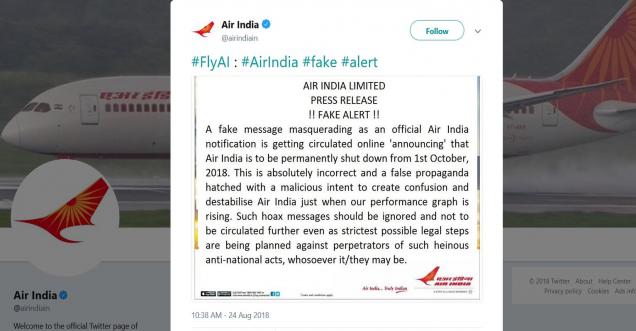 Brief Outline: Vide Office Memorandum… dated 18.08.2018 from The Supreme Court of India, it has been decided that Air India Limited would be permanently shut down by 1.10.18.

Vide Office Memorandum… dated 18.08.2018 from The Supreme Court of India, it has been decided that Air India Limited would be permanently shut down by 1.10.18. It has been decided unanimously by the board of directors of the company as well as officials from the ministry that Air India has become too unsustainable to operate properly. Due to poor profit margins and stagnant growth for years, the government is unable to bail out Air India owing to low probability of future returns. Therefore, Air India is to terminate all it's operations by 1 October 2018," the fake letter with signature of GM (industrial relations) read.

Facts Check Analysis: The India Airlines responded to this fake message on the social media and was quick enough to term it as fake.

The fake staff notification on Air India (AI) letterhead dated August 25, 2018, informing that the airline will be permanently shut down by October 1 and that employees should look for alternate jobs created panic among AI personnel on Friday night. The fake mail was circulated among members, WhatsApp groups.

Aviation secretary RN Choubey and AI chairman PS Kharola confirmed the letter was fake. Choubey said the government is ordering a probe to find out who is behind it.