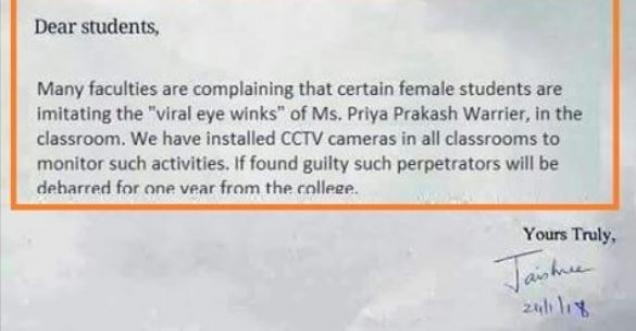 Viral Message: Wink like Priya Varrier and you will be debared, Many faculities are complaining that certain female students are imitating the Viral eye winks of Ms Priya Prakash Varrier, in the classroom.

Many faculities are complaining that certain female students are imitating the Viral eye winks of Ms Priya Prakash Varrier, in the classroom. We have installed CCTV cameras in all classrooms to monitor such activities. If found guilty such perpetrators will be debbared for one year from the college.

Viral Message Verification:- A photo doing the rounds on social media claims to show a circular released by a college in Coimbatore saying anyone who winks like Priya Prakash Varrier will be debarred from the college for a year.

The first news of this was published by Times of India, TOI later clarified as “On March 18, Times of India published a story about a Coimbatore college potentially barring students from imitating Priya Varrier’s wink in classrooms. The source of the story, however, seems to be a fake circular that is doing the rounds on social media.”

This is a fake story. The college V.L.B Jankiammal college of arts and science has responded by posting the original circular

This the original version and the only version.
Pls note that it was issued on 24/1/2017.
There are no other circulars. Especially nothing in 2018.
Everything else that’s circulating is fake...
Beware of any fake circulars spreading around..
share and help spread awareness..
thank u..