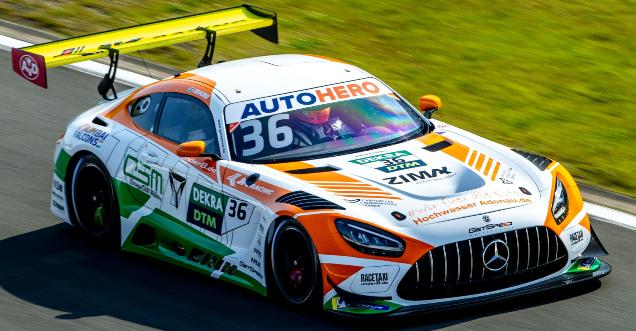 Nurburgring (Germany): Mercedes-AMG driver Arjun Maini marked yet another milestone in his racing career as the Bangalore-based racer became the first Indian to score points in the DTM Championship.

Maini showed tremendous maturity by finishing 10th and a career-best seventh at the two races held at the legendary race circuit. After enduring a series of unfortunate incidents, the Mercedes-AMG star finally had a race weekend devoid of any on-track misfortune and he made the most of this fact by delivering a steady and measured drive over the course of both of the weekend's races.

Racing for the GetSpeed team, Maini struggled to put an Ideal lap together and could only manage a 12th place start for Race 1. The Indian made a tremendous getaway, making a few places, as the cars made their way around the first lap. However, an incident involving fellow Mercedes star Max Bukh brought out the Safety Car, meaning the Indian had it all to do again. The restart saw Maini make up yet more positions with the Indian establishing himself in the top 10.

While history was made on Saturday, there was more to come on Sunday. A wet Qualifying 2 session meant Maini found himself piloting a GT3 racecar for the first time in wet-weather conditions. Despite his best efforts, Maini failed to qualify inside the top 10 meaning he had a mountain to climb during the second race of the weekend starting in P14.

The Mercedes-AMG driver showed remarkable maturity in what ultimately proved to be a chaotic race that saw nine cars retire from the event. In fact, it was a shrewd call from Maini’s GetSpeed racing team that proved to make the difference as an early and well-executed pit-stop saw Maini make up a host of positions over the duration of the race and eventually claim his best result in the gruelling German race series.

“Obviously I’m ecstatic with how the weekend went,” a delighted Maini stated.

“It’s been a long timing coming and I’m happy to have finally scored my first points in DTM. Obviously, a lot of credit has to go to the team at GetSpeed, I think our pit-stop was the second-fastest of the weekend and if it wasn’t for their tireless effort, this result would not have been possible.

“In fact, I think sixth was a definite possibility. There was the incident with Mike Rockenfeller, that cost us a lot of time and by the end of the race, I was gaining on Lucas Auer who finished only a second ahead of me.

“Nonetheless I look forward to the next round at the Red Bull Ring and I hope this weekend proves to be an inflection point for the rest of the season.”

The next race weekend is scheduled for the first weekend of September, 3rd to the 5th, and will take place at the Red Bull Ring in Austria.