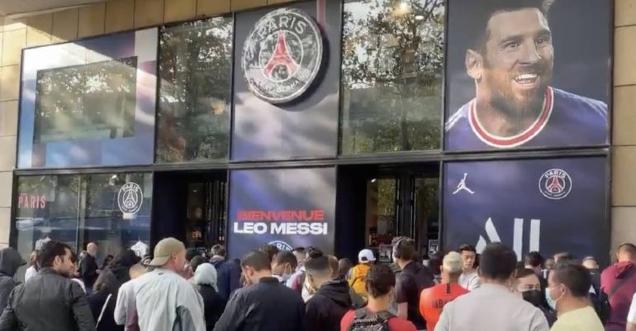 Paris: After Argentine superstar footballer Lionel Messi was confirmed as a Paris Saint-Germain (PSG) player, there was a massive queue outside the club’s shop to buy Messi jerseys.

A long queue was witnessed in a video shared on Twitter on Wednesday morning. Messi has signed a two-year contract with the French club after parting ways with FC Barcelona. Messi arrived in Paris on Tuesday (August 10).

At PSG, Messi will wear jersey No. 30. And on the first day of his official signing, there has been a massive craze for him from the football fans in Paris.

Also, fans greeted Messi outside the hotel where he and his family are staying. Thousands of fans were also at the airport to get a glimpse of Messi. From his hotel room balcony, Messi was seen waving to the fans.

As Messi was unveiled as a PSG player on Wednesday (August 11), he said, "My exit from Barcelona has been a difficult change but the moment I arrived here, I've been very happy."

"I've enjoyed my time in Paris from the first minute. I am very grateful that such complicated negotiations were made so easy. Truly. I feel this club is ready to fight for every title."

He said he is excited to play for PSG. "Everything that happened me in the last week was hard, and fast too. It was emotional, it changed from one day to the next, and there were so many feelings. Nobody was prepared for that. But I am excited about this new stage for my career and my family."

Messi thanked PSG fans for the support. "I am really grateful to the people in the street. I was in Barcelona when the press reported that people were already out in the streets. It is incredible. I want to thank them and I want to see them in the city and the stadium. It will be an incredible year."