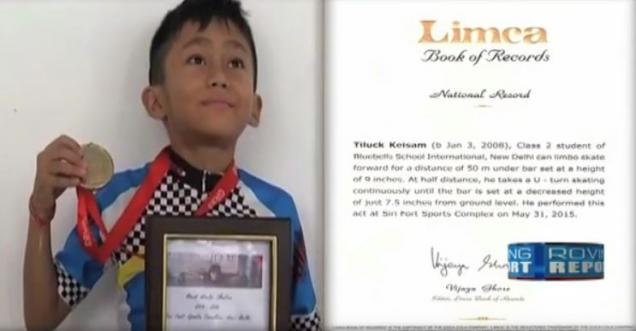 Manipur, Tiluck Keisam:  Strong will and determination can help you achieve anything in the world. A small boy from Manipur, Tiluck Keisam, an 8-year,  has set a benchmark by achieving a world record in farthest distance in Limbo Skating under bar at Siri fort stadium in New Delhi.

It is a great achievement as many fail doing so. The young boy covered 145 meters in just 41 seconds, the bars were set at the height of 30 cm from ground level and with one meter gap between the cones.

Tiluck Keisam is currently studying in class III at Bluebells School International in Delhi. He has been skating since 2013 and has already won many medals. He has his name already in the Limca Book Records, Tiluck is also a Guinness book of world record holder. He has now created the record of the farthest distance Limbo Skater under bars in the world.

His father, Ricky Keisam, feels proud of his child said that he always told his son to give his best and keep on trying till he succeeds.

His coach, Rohtash Dinodia, said that he is very talented and Tiluck  has been given enough training so that he can give his best in the world skating.

The little icon has a grueling training regime and practices for seven hours daily.