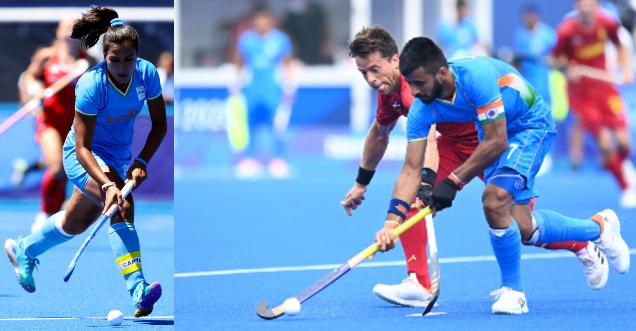 New Delhi: Indian hockey team captains Manpreet Singh and Rani have penned a letter to the country’s hockey fans after receiving “euphoric welcome” following their campaigns at the Tokyo Olympics.

The Manpreet-led Indian men’s hockey team won the bronze medal after 41 years at the Tokyo Games. The Rani-led women’s side narrowly missed out on a historic bronze, losing the playoff game 3-4 to Great Britain.

“This marks the beginning of a new era in Indian Hockey, and we hope that our performances and fighting spirit will inspire young players and the next generation. We also promise that we will keep working hard to make you all proud again,” they wrote.

Indian Hockey Fans around the globe,

Through this letter, we wanted to share with you some of the emotions we have experienced over these past three weeks and also let you know just how much your support meant to us during our campaign at the Olympic Games Tokyo 2020.

After a memorable tournament and a euphoric welcome we received upon our arrival in New Delhi on Monday, we have finally reached our respective homes. We must admit that the love and support we have received from across the country and even abroad has been overwhelming to say the least.

It has truly been an experience of a lifetime and we will cherish this forever.

The historic Olympic Games Tokyo 2020 campaign was the culmination of five years of intense hard work, dedication and a lot of sacrifices. We knew it wasn't going to be easy at all, we have had our ups and downs, but we never gave up. We were focused and gave our everything on the field in each game to show that we are fearless and can beat any team in the world.

Our achievement could not have been possible without the constant support and help from the Team Support Staff, Odisha State Government, Hockey India, Sports Authority of India (SAI), and the Ministry of Youth Affairs and Sports. We would like to thank each one of them for helping and encouraging us throughout the journey.

We would also like to thank each one of our fans, who have supported both teams at every step of the way. We are aware of you waking up early just to watch us play, you backed us all the way, you celebrated when we won, and you cried with us when we lost. This unconditional support we received from you means the world to us and we hope that you will continue to support us in the forthcoming Olympic cycle too.

We have big tournaments coming up and while we are now on a break for a few weeks, we are constantly thinking about "what next". The support and encouragement we have received over these past few weeks has motivated us more than ever to bring laurels to the country and we have set our sights firmly on the big-ticket events coming up this Olympic cycle namely the Asian Champions Trophy, Commonwealth Games, Asian Games, Asia Cup, the FIH Hockey Pro League and the FIH Men's and Women's World Cup.

This marks the beginning of a new era in Indian Hockey, and we hope that our performances and fighting spirit will inspire young players and the next generation. We also promise that we will keep working hard to make you all proud again.

These past three weeks were an experience of a lifetime and we will cherish this forever.

The Captains of #TeamIndia, @imranirampal and @manpreetpawar07 thank the Indian Hockey fans for their support. 🙏