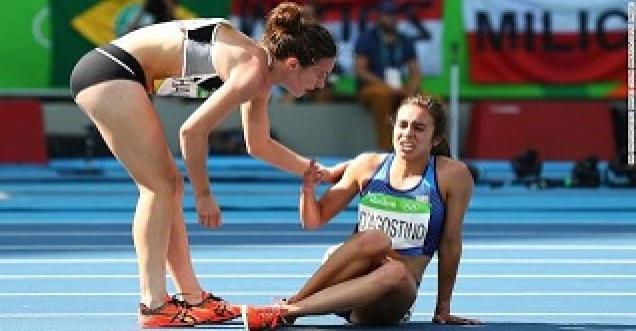 Most of the people know about three types of medal at the Olympics, gold, silver and bronze. very few know there is a another medals that can be won in the Olympics.

There is actually a fourth type of medal, which is arguably the most rare, noble and precious of them all. It is called the Pierre de Coubertin medal also known as the True Spirit of Sportsmanship award given in exceptional cases to certain players only.

This medal is named after the founder of modern Olympics, and exemplifies the essence of excellent sportsmanship. It is an extremely prestigious award; and represents ultimate sacrifice by the athlete.

Till date, less than 20 medals have been awarded to players from across the world.

This medal is a symbolic reminder of what the games are actually about – a strive for excellence in sports through a universal fellowship and communion, a sense that we are all united through our common humanity.

In Rio 2016, both New Zealand’s Nikki Hamblin and Abbey D’Agostino of the USA received the Pierre de Coubertin medal for their act of “selflessness and exemplary sportsmanship”.

During the 5000m heats race, Hamblin fell while running, causing her to unintentionally trip D’Agostinio, who was running just behind her. Hamblin lay on the ground, wondering what had happened, when she felt D’Agostino’s hand on her shoulder.

D’Agostino helped Hamblin up despite a badly injured knee. Then D’Agostino’s knee gave way, and it was Hamblin’s turn to help her.

Instead of throwing out in anger and frustration, both women showed a true Olympic spirit in aiding and encouraging the other to the finish line. D’Agostino must have found it excruciatingly painful to continue running; but when Hamblin looked back to see what she could do, The US runner encouraged her to go on, saying “keep going; keep going”.

Before the race, they were strangers who had never met each other.

After the race, they were bonded for life. Both finished last and hugged each other at the finish line. Their embrace warmed the hearts of all spectators, for here was the true Olympic spirit in all its glory.

Other players who have won the awards

In a climate of anti-Semitism and Fascism, with Hitler standing menacingly in the background, the games were controversial in many aspects.

Jesse Owens, arguably the world’s best ever sportsman, was helped by his German rival, Luz Long, who helped Owens qualify for the long jump by advising him where to place his foot.

Owens went on to win the gold in the finals, and the two rivals embraced, which was a powerful statement of defiance and ultimate courage in front of Hitler.

Long was said to have been brutally punished by the Nazi regime for this act of brave rebellion. Sadly he never knew that he was awarded this medal, for it was done posthumously in 1964.

That is the mark of a true hero, after all, to stand up for something that you believe in; to reject racism and politics in sport; to embrace your rival as your friend, and to give him an equal chance to compete in the games, even if it may cost you your life.

After pulling them from the water, he waited for a patrol boat to take the rescued sailors back to shore. Only then did he rejoin the race. When conferring the medal on him, the President of the IOC said: “By your sportsmanship, self sacrifice and courage, you embody all that is right with the Olympic ideal”.

There are many other athletes, however, whose heroism may not have got them the coveted medal, yet their inspirational acts of courage will remain etched in our hearts.

From a Syrian refugee fighting for her life in the Aegean Sea, she has gone to break all barriers to compete in the Rio Olympics. Her extraordinary journey is inspirational to millions of people.

The Olympics originated in the hope that we, mere humans, would emulate and mirror the Gods in our sporting prowess and attributes.

However, we know that mercy, compassion, and a strong sense of humanity are godly attributes too. They are also the virtues embodied in this prestigious and noble award for athletes; and their inspiring and uplifting stories weigh more than any other medal awarded in the Olympics.