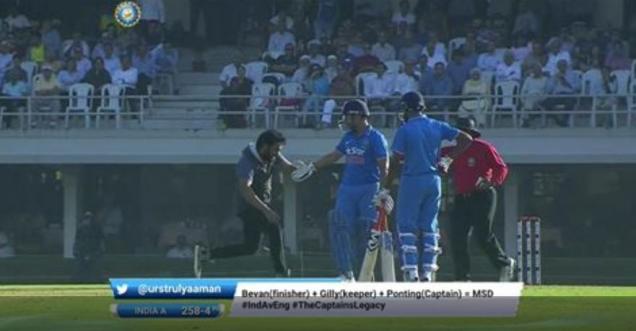 Mumbai: On Tuesday, 10th Jan, MS Dhoni played his last match as a captain of the Indian Cricket team. The crowd was full of noise and GaGa when he entered the field on Tuesday.

He made a good score with the bat even on Tuesday, 68 runs off 40 balls.

During a point of the match, a man ducked the security cover and ran out to reach to MS Dhoni to touch his feet.

As the man came over to Dhoni, the captain offered a hand shake with him; he took the handshake and fell on Dhoni’s leg.

How is that for idol worship? A fan falls on MS Dhoni's feet in the middle of the pitch, wrote BCCI on the facebook post.

The commentators kept out saying a fan out there and so on. Indeed there was a major security flop there on the pitch while the match was being played. Tickets were being sold for free at the Brabourne .