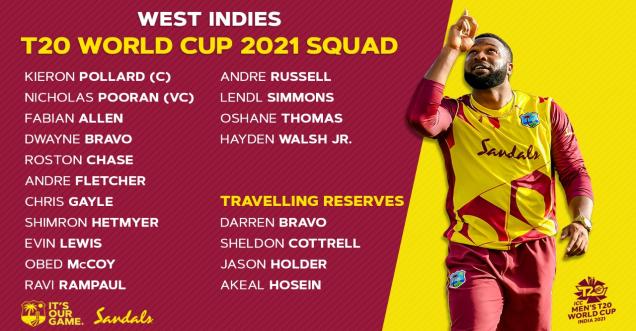 West Indies cricket team has won the ICC T20 World Cup title twice. In such a situation, the team will try to become the champion for the third time in the T20 World Cup 2021 to be played in UAE and Oman in India's hosting.

This is the reason that West Indies have announced a strong team under the leadership of Kieron Pollard in the ICC T20 World Cup. In this team of West Indies, including explosive batsman Chris Gayle, names like Andra Russell, Nicholas Pooran and Dwayne Bravo are included.

Let us tell you that West Indies are considered a dangerous team in the T20 format. In such a situation, it will not be easy for any opponent to compete against them.

In the T20 World Cup, West Indies will start their campaign against England on 24 October while the tournament starts on 17 October. India is hosting this ICC tournament and its matches will be played in Dubai, Abu Dhabi, Sharjah and Oman in UAE. The qualifier round of the tournament will be played from October 17 to 22.