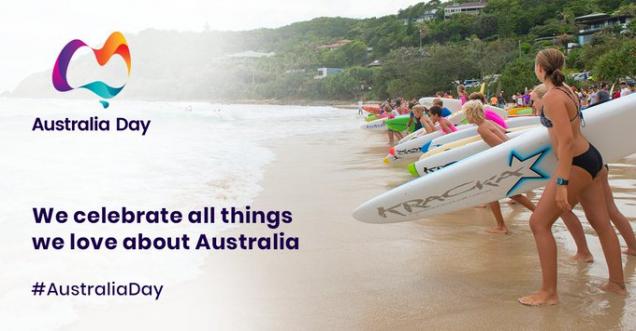 Australia Day is the official national day of Australia. Celebrated annually on 26 January, the day marks the anniversary of the 1788 arrival of the First Fleet of British ships at Port Jackson, New South Wales, and the raising of the Flag of Great Britain at Sydney Cove by Governor Arthur Phillip. In present-day Australia, celebrations reflect the diverse society and the landscape of the nation and are marked by community and family events, reflections on Australian history, official community awards and citizenship ceremonies welcoming new members of the Australian community.

It was not known as Australia Day until over a century later, records of celebrations on 26 January date back to 1808, with the first official celebration of the formation of New South Wales, held in 1818. On New Year's Day 1901, the British colonies of Australia formed a federation, marking the birth of modern Australia.

Australian day is considered as national pride and glory for all of the Australian  People. On this day they are flying the Australian flag from businesses, homes, cars.  Australian’s show this emotion on the Social Media, by telling and wishing all the loved ones and friends they know.

Why Australia day is important

Australia Day is the official national day of Australia. Celebrated annually on 26 January, it marks the anniversary of the 1788 arrival of the First Fleet of British ships at Port Jackson, New South Wales, and the raising of the Flag of Great Britain at Sydney Cove by Governor Arthur Phillip.

Importance of Australia in the present year 2020

This day is important in 2020, as like all the other years Australians celebrate by giving several awards to its people to show how they are important to society.  The awards given on this day are

#BREAKING: Doctor James Muecke has been announced as the 2020 Australian of the Year. The Adelaide eye surgeon is working to prevent blindness with his focus now on the leading cause - type 2 diabetes. Congratulations!https://t.co/6wejyOpLZJ

Professor John Newnham, WA Senior Australian of the Year, is an obstetrician whose work preventing premature births has had an extraordinary impact. #abc730 pic.twitter.com/afA0ArcQsi