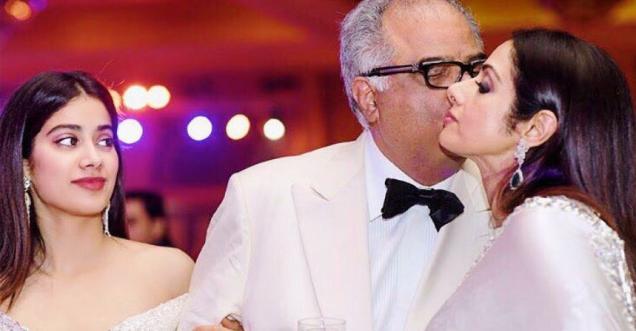 One of the most beautiful actress of the olden and present times Sridevi's sudden demise on February 24, 2018, had sent shockwaves in the film industry, however still after a couple of months her family and the people who loved her miss her.

You Were More Than A Legend, Your Vaccum Will Always Be Felt'. Boney Kapoor captioned the video as: Today would have been our 22nd wedding anniversary. Jaan... My wife, my soulmate, the epitome of love, grace, warmth and laughter lives within me forever...

Today would have been our 22nd wedding anniversary. Jaan... My wife, my soulmate, the epitome of love, grace , warmth and laughter lives within me forever... pic.twitter.com/0XWhFIvOvz

Latter in the day Janhvi Kapoor too posted a picture of the couple together.

Sridevi died on 24th February, 2018 and as per the postmortem analysis the reason of her death was stated as accidental drowning following the loss of consciousness.

Recently the late actor was honored with the Best Actress award posthumously for her film 'Mom' at the 65th National Film Awards. MoM was the last film in which Sridevi worked. MOM was Sridevi's 300th and last film. She also worked for a cameo in Shah Rukh Khan's Zero before her death, which will be remembered as her last onscreen appearance.