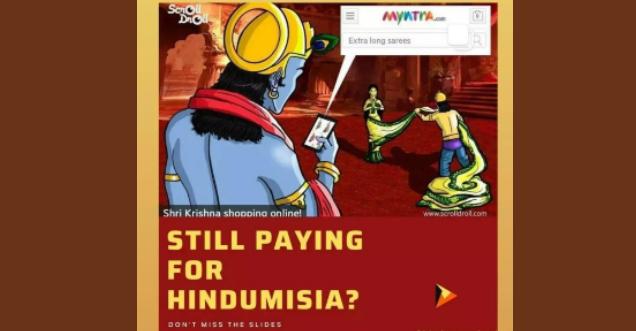 New Delhi: On Monday (August 23), netizens were up against the e-commerce platform Myntra. They urged everyone to boycott Myntra and uninstall the mobile application. We tell you what exactly happened.

Myntra came under attack on Twitter for its old past, dating back to 2016. The netizens slammed Myntra for its “anti-Hindu” poster. Back then, Myntra had clarified that it did not create the artwork and it also doesn’t endorse it.

It also said that it had pulled down the illustration and apologised publicly. The controversial illustration was done by ScrollDroll and it had tweeted that it was not Myntra’s fault.

I have too deleted the myntra app now. I respect the feelings of others. #BoycottMyntra

Do you have the guts to do a similar campaign by using images of revered gods of other religions ? If not then apologise and delete this from all your platforms otherwise we will be forced to #BoycottMyntra .
Let’s respect faith of people . pic.twitter.com/58nHFNHqYh

this has not been done by @myntra it is a post shared on 2016 which has popped now . But uneducated Bakths blindly tweeting #BoycottMyntra without knowing thefact, do fact check once before spreading Hatred . pic.twitter.com/DMfEBAH63Y