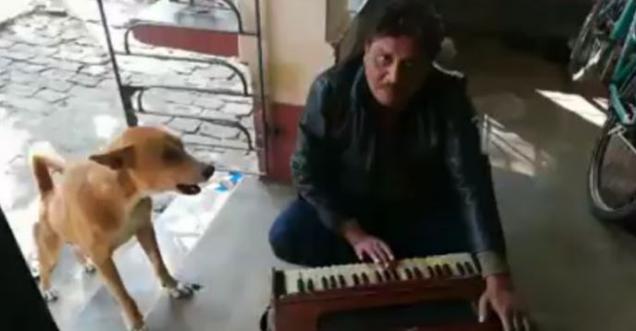 Ranu Mandal used to sing in the railway station till July 2019. Now she has become a Bollywood singer. Someone recorded a video of her song and uploaded it on Facebook and she became famous.

Ranu Mandal dominated social media in the last months of 2019. Now it seems that the same will happen in 2020. Why? A video is becoming very viral right now. It is not of Ranu singing in this, rather this video is of a cute dog.

What's in the video?

In this viral video, a man is seen playing harmonium. He is also singing Ranu's song 'Teri-Meri Kahaani…'. A dog is sitting next to him, who is supporting the man. The dog is making a lovely melody much better than the man, many in social media commented. At the same time, the dog is also shaking his hands occasionally.

Whoever is watching this video is becoming a fan of dogs, the video is widely liked and shared.