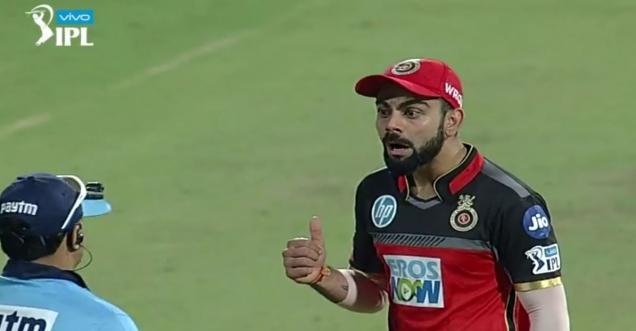 India, IPL: Cricket is full of emotions and often the expression comes to the face. The same can be said for the match played between Royal Challengers Bangalore and Sunrisers Hyderabad in their another Indian Premier League (IPL) 2018 match at M Chinnaswamy stadium, Bengaluru on Thursday.

On-field drama. Out or Not Out? https://t.co/d4IvUOL4Ea

One such incident took place in the third over of SunRisers Hyderabad innings when the  opening batsman Alex Hales played Umesh Yadav over the mid-on. RCB's Tim Southee ran forward to take a low catch and RCB started celebrating Hales wicket as the catch seemed to be cleanly taken by the New Zealander.

The third empire was referred to take the decision of the catch, to check if it was a clean catch ot not since it was very close to the ground. The third umpire gave the decision as not out. Not just fans, commentators too shocked by the decision. However the replay showed the catch was clean.

Surprised by the decision, Captain Virat Kohli was seen running towards the on-field umpire to discuss the matter.