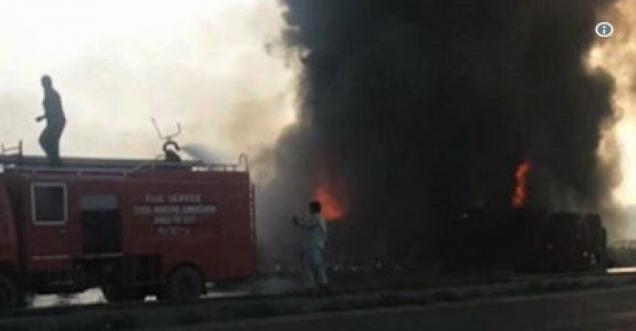 The tanker carrying 40,000 litres of fuel overturned after trying to make a sharp turn while travelling from Karachi to Lahore on the main highway.

It is reported to have exploded after fuel leaking from its damaged container caught fire.

One hundred people were injured as a result of the incident, the DC added.

A large crowd of people, including women and children, had gathered at the scene to collect the leaked oil when the fire erupted.

“When [the tanker] turned over the residents of the nearby village of Ramzanpur Joya rushed to the site with buckets and other containers, and a large number of people on motorcycles also came and started collecting the spilling fuel,” regional police chief Raja Riffat said.

“After about 10 minutes the tanker exploded in a huge fireball and enveloped the people collecting petrol. It was not clear how the fire started.”

At least six cars and 12 motorcycles were burnt in the blaze.

The charred wreckage of the motorcycles and cars could be seen scattered on the highway, along with kitchen utensils, pots, water coolers, jerrycans and buckets which victims had brought to collect the petrol.

The fire brigade arrived on the site of the incident shortly after the blaze started and rescue operations were initiated.

Firefighters fought the flames for over two hours before extinguishing the fire.

The injured were transferred to District Headquarters Hospital and Bahawal Victoria Hospital, rescue officials said. They added that all bodies were removed from the site of the incident and only the damaged vehicles remained.

Dr. Rizwan Naseer, director of Punjab provincial rescue services, said many of the badly burnt bodies are beyond recognition.

At least 40 amongst the injured are in critical conditions and may be transferred to hospitals in Karachi and Multan for treatment.

Army helicopters were used in the rescue operations to transport the injured to the hospitals.

Army helicopters used to transfer injured to hospitals for treatment.─ISPR

"Army Aviation helicopters sent for evacuation of casualties to hospitals [and] burn centres. Hospitals placed on high alert," he added.

Our prayers for 120+ victims of an Oil Tanker Explosion near Bahawalpur. Terrorism, Accidents & negligence have preyed on countless lives. pic.twitter.com/dU2ySpTXfB

“Prime Minister Nawaz Sharif has expressed deep grief over the heavy loss of life in the unfortunate accident of oil tanker fire at Ahmad Pur Sharqia, Bahawalpur,” the statement said.

Citizens expressed their grief on social media, sharing messages of sorrow with two deadly bombing attacks in Quetta and Parachinar in the backdrop.