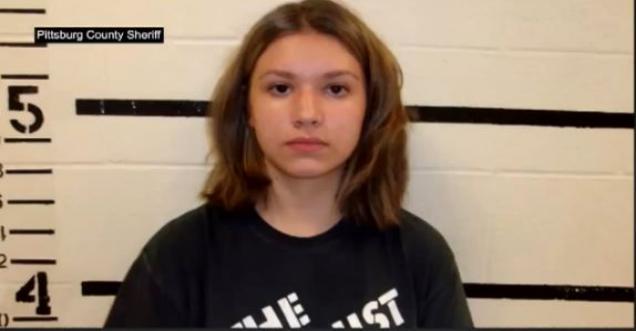 An 18-year-old women named Alexis Wilson was charged with felony terrorist hoax for allegedly threatening to “shoot up” McAlester High School, as per court records. She is currently in Police custody. Deputies seized an AK-47 assault rifle with six magazines and a 12-gauge shotgun with a stock sleeve for extra shells.

One of Wilson’s coworkers told them Wilson had threatened “to shoot 400 people for fun and that there were so many people at her old school that she would like to do it.”

Wilson was expelled from McAlester High after being caught with a knife and a swastika at school multiple times. An affidavit obtained by NBC News says that she experienced bullying when she attended the school and was unable to re-enroll. She was denied re-admission seeing the previous incidents in the school.

Deputies asked Wilson if she made any comments about guns to a coworker and Wilson said she did. Wilson said she told coworkers she recently purchased an AK-47 and told a coworker “she could come to her residence and shoot with her,” the report states.

The report states deputies asked Wilson if she talked about “shooting up the school or people.” Wilson first said she did not say that before saying “she would never shoot up a school” and her coworker didn’t take what she said the right way, according to the report.

Wilson is currently in custody and transported to the Pittsburg County Jail.

As per mcalesternews, Pittsburg County Special Judge Mindy Beare set bond at $250,000 and a hearing date for Sept. 27 at Monday’s initial appearance arraignment.

A message from Mr. Randy Hughes, Superintendent of McAlester Public Schools regarding McAlester High School, he said, “We know there was one person who made an alleged threat to our school and that person is in custody at this point of time.”

“I am saddened by the state of where we are at in our society. I am grateful to God for watching over us. I am grateful for our police department for acting swiftly and quickly. I am relieved. You always look at the other side and think about what could have happened. We don’t want any of our kids hurt,” Hughes said.

Randy Hughes, has requested for additional security at the high school, He asked teachers and students, just to be aware.

“We’re having school,” Hughes said. “We went through this last year when we had a threat and it’s the same thing — added security, extra police officers.