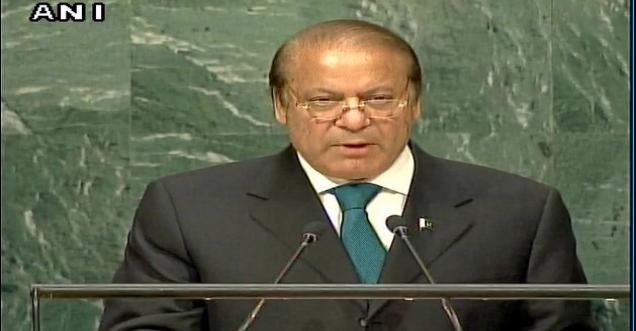 United Nations September 21: Once again Pakistan Prime Minister Nawaz Sharif has done it, lamenting the same old stereotype voice over Kashmir and again crying over the Kashmir issue said that peace between India and Pakistan cannot be finally achieved without any resolution to the Kashmir dispute, said at the 71st session of General Assembly of the United Nations in New York

Peace between India and Pakistan cannot be finally achieved without resolution to the Kashmir dispute: Nawaz Sharif #UNGA

Sharif quoted, amid dim presence of people "The UN Security Council has called for the exercise of the right to self-determination by the people of Jammu and Kashmir through a free and fair plebiscite held under UN auspices,"..

Nawaz Sharif accused India of putting "unacceptable" conditions on dialogue with Pakistan and said the world would ignore the dangers of rising tensions in South Asia at its own peril.

PM Sharif says India poses unacceptable conditions to dialogue.India's only condition is an end to terrorism. This not acceptable?:MEA

Sharif said that the talks are no favour to Pakistan, they are in the interest of both countries.

He mentioned about the recent unrest in the Kashmir valley after the killing of Hizbul militant Burhan Wani.

Glorifying Burhan Wani as a symbol of new ‘Kashmiri Intifada’ that was led by the common Kashmiris , He demanded an "independent enquiry" into the "extrajudicial killings" in Kashmir.

He also spoke of Indian brutalities and human rights violations by Indian forces in the Kashmir valley and said Pakistan would present a dossier on Kashmir to the world body.

Sharif, whose government has persistently been raising the Kashmir issue at the international forum, said that his country wants peace with India, and has gone the extra mile to achieve that, but India has "imposed preconditions".

"Pakistan fully supports the self-determination of Kashmiris' legitimate demand," he said.He said the UN Security Council should ensure implementation of resolutions on Kashmir.