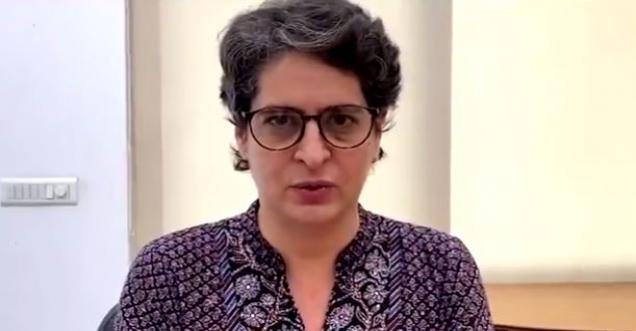 Hathras: After the alleged gang rape of a Dalit girl in Hathras, Uttar Pradesh, there is an outcry from social media on the road in the matter of generosity. On Thursday, former Congress president Rahul Gandhi and UP in-charge Priyanka Gandhi were going to Bulgadi village to meet the victim's family. But in Greater Noida itself, the UP police stopped his convoy. After which both have left for Hathras. The UP Police has sealed all boundaries regarding Priyanka Gandhi and Rahul Gandhi going to Hathras. Section 144 is applicable to the district. No more than 5 people can gather anywhere.

Priyanka Gandhi fiercely targeted the UP government. Talking to a channel, Priyanka said- 'I get angry. I also have an 18-year-old daughter. Every woman should get angry. Where is it written in our Hindu religion that the last rites should be held without family? '

Congress leader Rahul Gandhi and Priyanka Gandhi's convoy has been stopped on Greater Noida Yamuna Expressway. Now both the leaders are out on foot along with the Congress workers. Congress leaders are marching towards Hathras. Police is deployed at this place.

Priyanka Gandhi Vadra along with Congress workers walks along the Yamuna Expressway, after her vehicle was stopped by the authorities.

She is on her way to Harthras, to meet the family of the 19-year-old who was allegedly gang-raped. pic.twitter.com/1RP8Bvco8G

SP said -
SP Vikrant Veer will not allow him to enter the city, he has not received any information under his protocol about the arrival of Rahul and Priyanka. Limitations are sealed. No one will be allowed to come to Hathras because the political element can increase the crowd. They will be stopped at the borders keeping in view the possibility of deteriorating law and order.

Case filed against 145 people including Congress District President
After the incident in Hathras on Wednesday, the police has taken major action on Thursday. A case has been registered in Kotwali Sadar against 145 people who were causing a nuisance. A case has been filed against 25 nominated and 120 unidentified, including the Congress President. A lawsuit has been filed against all under sections 147, 149, 332, 353, 336, 347, 427, and 3 of the IPC. Not only this, but the IG has also formed several teams to arrest the accused. There was a ruckus in the city of Kotwali Sadar area on Wednesday, during which the government's consent was damaged.