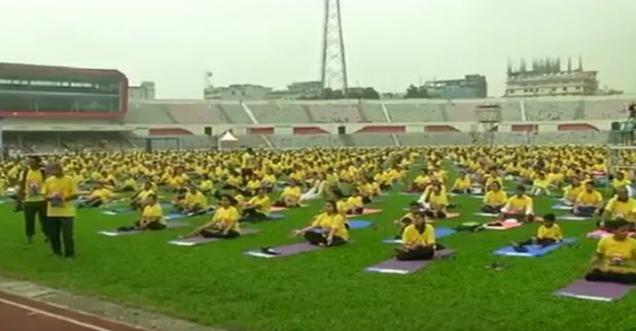 New Delhi: On the occasion of International Yoga Day, today, Yoga was organized in many countries around the world. During this time people participated in yoga in different parts of the world. Yoga Guru Baba Ramdev did yoga in Ahmadabad on International Yoga Day. He was accompanied by BJP national president Amit Shah and Gujarat Chief Minister Vijay Rupani.

Both leaders joined yoga with thousands of people. There was rain during the program, but there was no hindrance in the interest of people's yoga and they continued to do yoga even in heavy rain. During this Baba Ramdev claimed that many people here are doing yoga together, which itself is a world record.

Baba Ramdev said that when Narendra Modi went to the United Nations as soon as he became the Prime Minister, he proposed Yoga Day. The whole world is doing yoga today, and this is the third yoga day is celebration after it started in 2015.

Kejriwal did yoga in New Delhi

In Chhattisgarh's capital Raipur, a grand event was organized for Yoga on this day. Raman Singh has done yoga in Raipur. Many ministers were also present along with him.

CM Sarbananda Sonowal did yoga in Assam. He was accompanied by Minister Hemant Biswa and Acharya Bal Krishna.

Around the world, where Yoga Day is shown as a pride. Yoga was also done on the World Heritage site Machu Picchu in Peru. Hundreds of people climbed here on the mountain.

A large number of people, including the Indian community, participated in special yoga sessions organized by the Indian Consul General in America to celebrate the 3rd International Yoga Day. Consul General Rewa Ganguly Das led the organizing Yoga Day celebrations at consular campus and participated in Yoga and Art of Living Sessions. Prime Minister Narendra Modi's message was delivered on yoga day before yoga and meditation were given to people who attended two hours of yoga and meditation camps.

Let us know that the consulate had planned to hold the main event of Yoga Day in the historic and popular Battery Park of the city, in which hundreds were expected to participate but due to bad weather the ceremony had to be canceled and organized in the consulate premises. Many people participated in yoga sessions in the conservatory and practiced Surya Namaskar, Pranayama, AOL session and other yoga exercises.