The PM said that a package of 20 lakh crore rupees will give a new impetus to the development journey of the country in 2020. 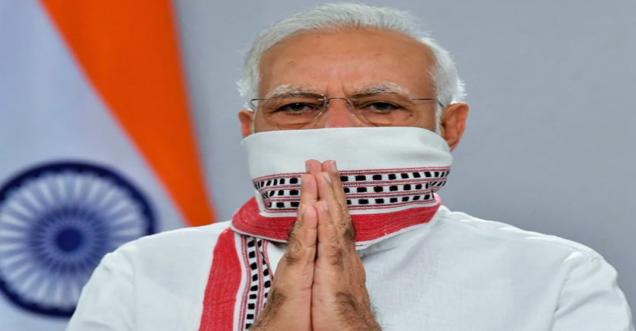 In the midst of Coronavirus, Prime Minister Narendra Modi (PM Narendra Modi) addressed the nation on Tuesday evening. Beginning the address, he said that the world has now passed more than four months while coping with the corona infection. During this time 42 lakh people have been infected in all countries. More than a quarter of a million people have died tragically. In India too, many families have lost their relatives. I express my condolences to all. A virus has destroyed the world. India's progress has always shown the progress of the world. India's actions have an impact on world welfare.

Today India's medicines are reaching the world to fight for life and death. It is natural that every Indian is proud. The world is beginning to believe that India can do very well. It can give a lot of good to mankind. The question is how. The answer is the resolve of self-sufficient India.

Today again India is progressing successfully towards development; even then the path of world welfare is firm. Today we have the means, the power. We have the best talent in the world. We will improve our quality even more. We can and will do this. The PM said that I have seen those days of the Kutch earthquake before my eyes. There was only debris everywhere. It was as if Kutch had fallen asleep wearing a sheet of death. But Kutch is gone now. This is the resolving power of us Indians. If we are determined then no goal is impossible, no path is difficult. There is a will, there is away.

PM Modi said, 'From today every Indian has to become' vocal 'for their local, not only to buy local products but also to promote them proudly. I am confident that our country can do this. Self-reliance, along with giving us happiness and satisfaction, also empowers us. Our responsibility to make the 21st century, India's century, will be fulfilled only with the resolve of self-reliant India. This responsibility will get energy only from the life force of 130 crore countrymen. This era of self-reliant India will be a new vow for every Indian, as well as a new festival. Now we have to move forward with a new life force, a new resolve.

The fourth phase of the lockdown

During his address to the nation, Prime Minister Narendra Modi has made a big announcement regarding the fourth phase of lockdown. He said that there will be a fourth phase of the lockdown, but it will be completely different. New rules will be set for this so that people keep a distance of two yards while keeping pace with other works. PM Modi said that the rules of the fourth phase of lockdown will be given before May 18. He said that all experts say, scientist says that Corona will remain a part of our life for a long time. But at the same time, we cannot allow this to happen that our lives will be confined only around the corona. We will wear masks, follow a distance of two yards but will not let our goals go away.

Therefore, the fourth phase of lockdown, lockdown 4, will be completely new, with new rules. Based on the suggestions we are getting from the states, information related to Lockdown 4 will also be given to you before May 18. I am confident that by following the rules, we will fight Corona and will also move forward.

He said that we have been told here- 'Sarvam Atma Vasam Sukham', that is, what is under our control, that is under our control, that is happiness. Self-reliance, along with giving us happiness and satisfaction, also empowers us. Our responsibility to make the 21st century, India's century, will be fulfilled only with the resolve of self-reliant India. This responsibility will get energy only from the life force of 130 crore countrymen. This era of self-reliant India will be a new vow for every Indian, as well as a new festival.

In the meeting held on Monday with the Chief Ministers of the states, PM Modi indicated the continuation of the lockdown with fewer restrictions. In the meeting with the Chief Ministers, the Prime Minister has sought suggestions from all the states till May 15 for how the lockdown will happen next. During the meeting, most of the states have also demanded to increase the lockdown. During this time the states said that instead of keeping the red zone at the district level, it should be kept in the container zone, and activities should be started in the rest of the district.

Meanwhile, the total number of coronavirus infections in the country has increased to over 70,756. According to the data released by the Health Ministry, so far 2293 people have died due to corona in India while the number of infected has reached 70,756. At the same time, 3604 new cases of corona have been reported in the last 24 hours and 87 people have lost their lives due to this. So far, 22,455 patients have been cured of this disease. At the same time, the recovery rate has steadily improved to 31.73 percent. Lockdown has been imposed in the country to prevent the spread of corona infection, which will remain in effect until 17 May.

The confirmed cases in the world have reached 4.23 million and with 290000 death in the world.