Kerala has been known for the highest literacy rate of 93.91 in Bharat, however, such incidents teach us and ask s us question, are Keralites really educated or these statistics only in books and for media. 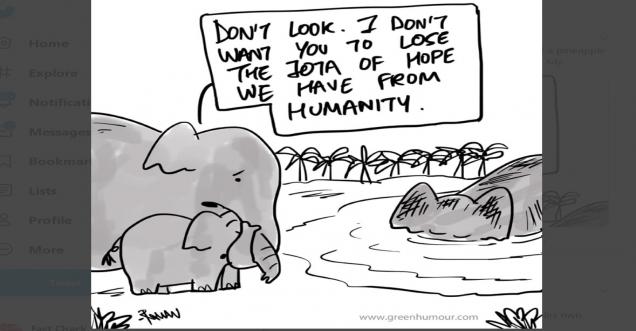 Malappuram Pregnant Elephant: Though FIR against unidentified people for feeding cracker-filled pineapple to a pregnant elephant in Kerala's Malappuram, yet the image of Kerala for many will change after knowing how few individual fed crackers filled pineapple to a pregnant Elephant. The question is not about taking an avenge to the animal's death, but the question is why such animal cruelty happens. Should severe punishment be not given to such people who are caught in such heinous crime whosoever?

Kerala has been known for the highest literacy rate of 93.91 in Bharat, however, such incidents teach us and ask s us question, are Keralites really educated or these statistics only in books and for media.

A pregnant Elephant goes out in search of food on the streets of Malappuram. She is offered pineapple. She eats by trusting in humans. She did not know that she was being fed pineapple filled with crackers. The crackers burst in her mouth. Her mouth and tongue get badly injured. She could not eat anything due to the injuries in her mouth. During pregnancy it is more likely animals also get hungrier, the appetite of a mother elephant increases.  She also had to take care of his child. But due to the wound in the mouth, she is unable to eat anything. The injured elephant wandered the streets, suffering from hunger and pain. Even after this, she does not harm any human being, does not break any house. Searching for water. The elephant eventually walked up to Velliyar River and stood there with her mouth and trunk in the water, perhaps for some relief from the unbearable pain. Local people informed forest officials about the injured elephant. The Forest Department tries to bring her out of the water, but the elephant probably knew that its end is near. And after a few hours standing in the river, she dies.

Doctors were present on the spot to carry out a post-mortem. The elephant was taken back inside the forest in a truck, where forest officials cremated her.

Humans have really become shameless, that they are capturing everything all around them, and yet they want more. We are not ready to plant even a single tree and want the beautiful jungle and all its animals. Just think if nature is not there than what will be left with us. How educated we are we only come to know in such incidents happening around us.

A tweet by Green Humour@thetoonguy, well says all the things about us Human beings.

As news of a pregnant #elephant killed in #kerala by being fed a pineapple stuffed with a firecracker makes the rounds, this is all I have to say. pic.twitter.com/yBJuqVgiyl

The total number of elephants in India is between 20,000 and 25,000. The Indian elephant is classified as an endangered species. An animal that was once the pride of kings is fighting for its existence today.

It's murder,Malappuram is famous for such incidents, it's India's most violent district.For instance, they throw poison on roads so that 300-400 birds & dogs die at one time: Maneka Gandhi,BJP MP&animal rights activist on elephant's death after being fed cracker-stuffed pineapple pic.twitter.com/OtLHsuiuAq

According to details shared by Forest officer Mohan Krishnan on Facebook, the wild elephant had come out of the forest in search of food. As she walked on the streets, locals offered her pineapple stuffed with crackers, which exploded in the pregnant elephant's mouth and she died on May 27.

As per forest officier,

Farmers are known to keep pineapples and other fruits stuffed with firecrackers to kill wild boars that ravage the crops. Under the Wildlife Protection Act, capturing, trapping, poisoning, or baiting of any wild animal or even attempting to do so carry a fine of up to ₹25,000 or a jail term of up to seven years, or both.

In a few days, we will forget these incidents like the fire in Amazon Jungle, yet we must be aware of killing any animal for fun is the greatest sin of all.