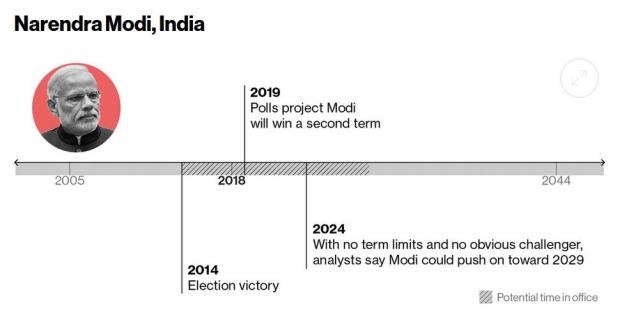 India, New Delhi: It may be the loosing moment for the Modi Government in the Uttar Pradesh bypolls. The BJP government in UP lost the bypoll for the Lok Sabha seat of Phulpur and Gorakhpur. Indeed it was something the BJP never expected all about this.

Leading this many opposition parties were all enthuastic for the 2019 election, however a survey by the Bloomberg, will definitely make the opposition to rethink their plans for the upcoming lok Sabha election in 2019. The report by Bloomberg was published on March 16, 2018.

Prime Minister Narendra Modi dominates India’s political landscape and is widely predicted to win the next national election in 2019. With five-year terms, that means he could rule over his country’s 1.3 billion people until at least 2024—possibly longer.

Although he lacks the upper-house majority necessary for big structural reforms, Modi’s Hindu nationalist Bharatiya Janata Party has proven its popularity, winning numerous state-level elections since he came to power in 2014.

Looks like it is going to be the golden age for India when The BJP is going to rule for more than 3 times in a row.

Modi, 67, is by far the most popular Indian politician. The opposition Congress Party is weak and lacks a charismatic leader, while regional rivals are vulnerable to the BJP’s formidable election machine. His party’s policies, even when economically disruptive, are still popular with the masses.

“Certainly, it seems like they will come back into power in 2019 given their success in state elections and massive popularity—and in 2024, that’s also on the agenda,” said Reshmi Khurana, a Singapore-base managing director at the consultancy Kroll. “The absence of a strong opposition makes that highly possible.”