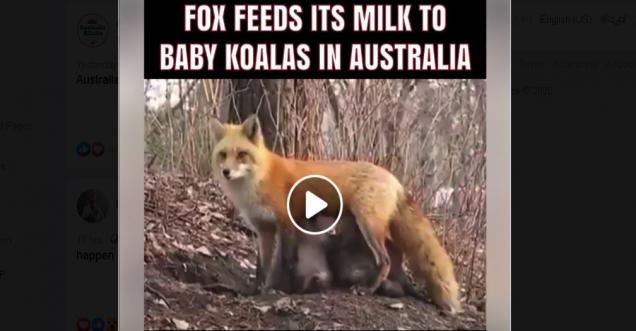 Fake news claims: A video shared by lakhs on social media claiming “a FOX feeding its Milk to Baby Koalas in Australia, greatness of Motherhood”

A Fox allows itself to feed Koala Babies in Australia. In #AustraliaBushfires babies have lost their mothers & many mother animals have lost their little ones.
This is fine example of Humanity#Tiredearth #AustralianWildFires #Australia #ClimateAction

A Fox allows itself to feed Koala Babies in Australia. In #AustraliaBushfires babies have lost their mothers & many mother animals have lost their little ones.
This is fine example of Humanity#Tiredearth #AustralianWildFires #Australia #ClimateAction
https://t.co/70Ei16zvzf

News Verification: The Instances of this Video has been viral on Social media websites like Facebook, Twitter and others have been widely liked by all the users who have seen. While many have raised the authenticity of this video, claiming it may be wrong and the babies in the video are of the fox itself.

A user pointed this out and posted on Social media the full video, and said Sorry to burst everyone's bubble that believed this was true when in FACT it is FAKE. Below is the original video (Renards Roux - Tetee) In 2014, YouTuber Luc Durocher uploaded the video, along with a few more videos, which shows the mother red fox breastfeeding her kits. The caption in French reads, Renards roux - Tétée, (meaning) Red foxes - Feeding.
https://youtu.be/rwk3Au_O5_w
Since this video is available from 2014 and other videos confirm that the mother fox is feeding her kits, the viral claim that it is related to the Australian bushfires is misleading. A video of a red fox breastfeeding has gone viral with the claim that it is feeding baby koalas, and relating it to the bushfires in Australia. Facebook page Daily India Times posted a 33-second clip of the same with the caption, A Fox allows itself to feed Koala Babies in Australia. #AustraliaBushfires.India Today Anti Fake News War room (AFWA) has found the post to be misleading. The video is at least six years old and has nothing to do with the recent bushfires in Australia. Also, the mother fox is not feeding koalas but fox kits.

With a combination of InVID reverse image and Google searches, we found that the video is on the Internet for quite some time and it has been circulating with multiple claims.

Watch the original video below.