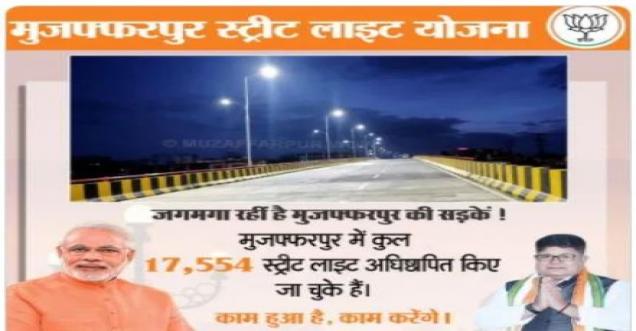 News Claim: Bihar Municipal Development and Housing Minister Suresh Kumar Sharma shared a photo of a flyover with illuminating street lights, which reads, "Muzaffarnagar Street Light Scheme ... the streets of Muzaffarnagar are illuminating!" A total of 17554 street lights have been installed in Muzaffarpur. "

With this photo Suresh Kumar Sharma wrote the caption, "Worked, worked, will develop Muzaffarpur." That is, I have tried to tell that the picture of a lighted flyover illuminated with street lights is a sample of good work of the Bihar government.

News Verification: In our investigation, we found that this photo in a report on 'The News Minute' website, which appeared on 10 August 2020.

According to the report, RHS Flyover was inaugurated by Telangana Government Minister KT Rama Rao (KTR) on 10 August 2020, after which it was opened to the general public.

We also found this photo in a tweet dated 9 August 2020 by KTR, shared by Suresh Kumar Sharma.

Verdict - The viral photo that has been shared by Bihar  Municipal Development and Housing Minister Suresh Kumar Sharma is of Hyderabad flyover not from Muzaffarpur, Bihar.