A Message in the name of Asif khan went viral on Social media, claiming that Asif Khan abused Hindu god on the twitter. 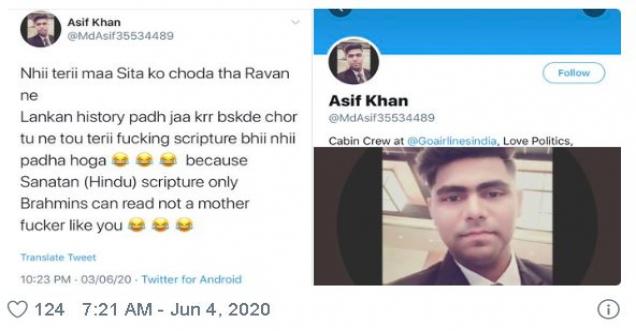 News CLAIM: A Message in the name of Asif khan went viral on Social media, claiming that Asif Khan abused Hindu god on the twitter.

Whether @GoAirlinesIndia
Will sack Asif Khan @MdAsif35534489 if his twitter bio believes. @TwitterIndia why this account is till active ? @DelhiPolice

Whether @GoAirlinesIndia
Will sack Asif Khan @MdAsif35534489 if his twitter bio believes. @TwitterIndia why this account is till active ? @DelhiPolice

.. It's not at all safe for women n girls to travel by @goairlinesindia "Go Air" until they fire r@pist cabin crew Asif Khan @MdAsif35534489 from job. #boycottGoAir pic.twitter.com/gK1WWStqik

TRUTH & Verification: Asif Khan works in an airline company GoAir and the company has fired him too soon after knowing of a derogatory tweet claiming to be that from Asif Khan himself. However, Asif denied the allegation and filed a police complaint.

Company policies of GoAir allowed terminating his contract with the initial finding and huge backlash against Asif on Social media, as #BoycottGoAir started trending on social media. GoAir said in a tweet, “GoAir has Zero tolerance policy and it is mandatory for all GoAir employees to comply with the company’s employment rules, regulations and policies, including social media behavior.

The airline does not associate itself with personal views, expressed by any individual or an employee.

Asif posted his version of the story on Facebook stating,

It's been hell for me and my family since yesterday.
I have been getting death threats, abusive hate messages, my mother and sister threatened with rape, all because of a mistaken identity and because a guy with same name as mine had abused Holy Hindu God's.

I wish to clear the air and request to stop abusing my family please.

This is my side of the story:

My name is Asif Iqbal Khan resident of Mumbai and employee of GoAir working as a Trainee First Officer. I struggled really hard to get this job. Believe it or not but I struggled 6 Yrs to get this respected job in a respected airline and got this job in December last year 2019. My first Dream Job. But suddenly everything came crashing down yesterday with a call.
This is what happened, On 4th June 2020 at around 3 pm I got a couple of call by my senior captains from GoAir enquiring about my Twitter account. I thought that something is amiss so I searched on twitter and found that Boycottgoair is trending because some person with same name as mine and his profile stating that he works as cabin crew with go air had abused Hindu Gods. But looking at his picture one can clearly see it’s someone different and not me. Then a few minutes later my brother got a YouTube link sent by his friend who works at go air as cabin crew asking if he knows the person in the video and she asked him because she saw that video and saw my brother as my mutual friend on Facebook. I then realised how huge this matter is.
In the YouTube video which was put by a channel named “Buzzing Trends Official” the person tried to blame me for this disgusting act and to prove his point he stole photos of mine from my Facebook account and had put it in his video, but that didn’t prove anything as he had also put the profile of the fake twitter account, the impostor and on comparing the face and both the accounts again it clearly showed that it’s different person and not me. Me and my family pointed this out in the comment section of that video and after realising his mistake the channel owner took the video down. We made him take the video down because clearly he was trying to malign my name and along with it he was also trying to maligning the company’s name where I work.
I immediately went to my local police station to lodge a formal complaint about this matter. I have attached a copy of the same.
Also I have sent a formal complaint to the cyber cell as well.
I would also like to point out that I have a clean record in the past, I have no criminal record and I have never done such thing ever and never intend to do such thing in the future, I respect all religion and it’s just not me. People who know me can vouch for it. People like my Friends and Family, School batchmates, batchmates from GoAir training batch.
I would like to again clarify that the comments made by the impostor is his views and not mine or my company GoAir.
My only request is to please investigate this matter fairly and swiftly because this whole matter has put a huge stress on me and my family especially my dad who is very ill at this moment.
I trust our Judicial System and I trust my company GoAir to deal with this matter swiftly and sensitively.
I am willing to Co-operate by whatever means possible in this investigation to help nab the culprit.

Thanks and Regards,
Yours Sincerely
Asif Iqbal Khan

This is a follow up on my case. I have put another post on FB (link above).
Please do read.
I have put the whole FIR Copy on my FB post. pic.twitter.com/mARF8flT6c 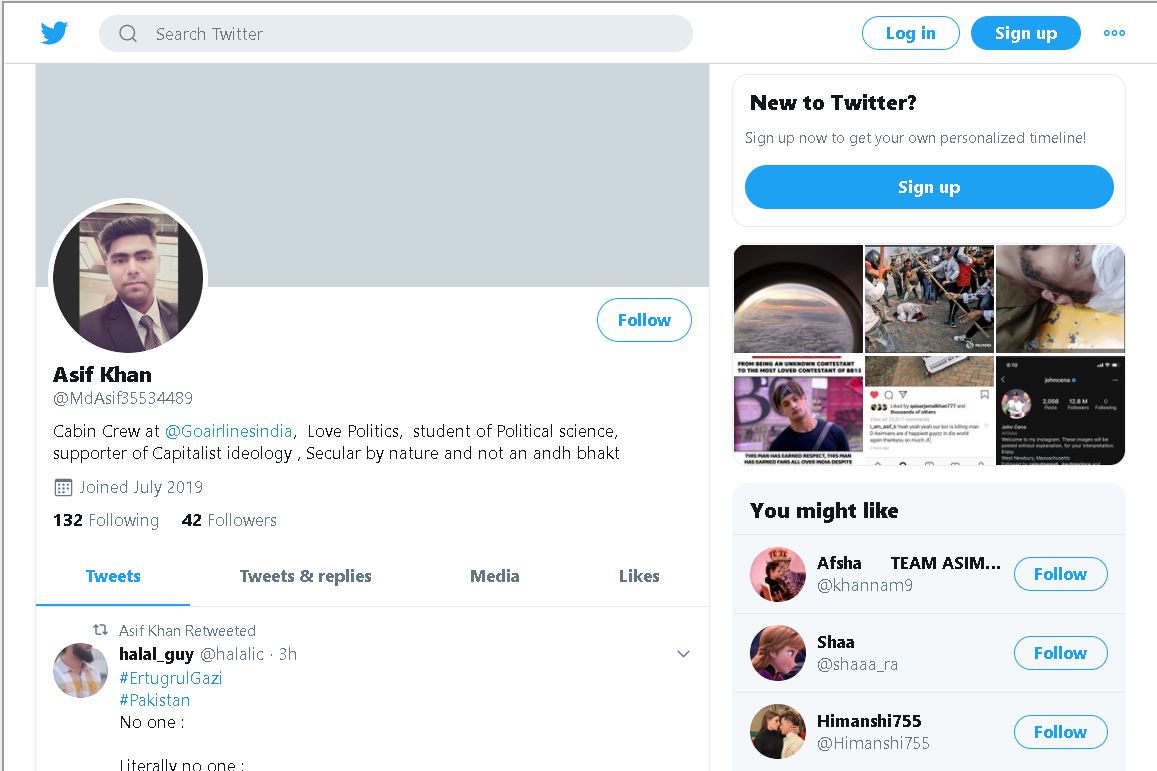 VERDICT:  Asif has filed a police complaint against the forged account. 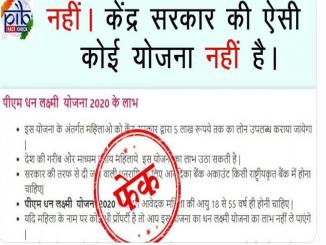 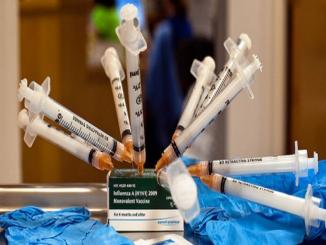 Do Bill Gates wants everyone in the US microchipped 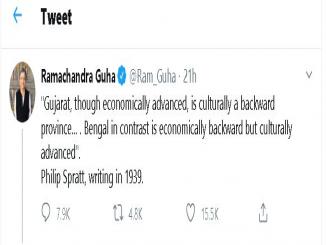