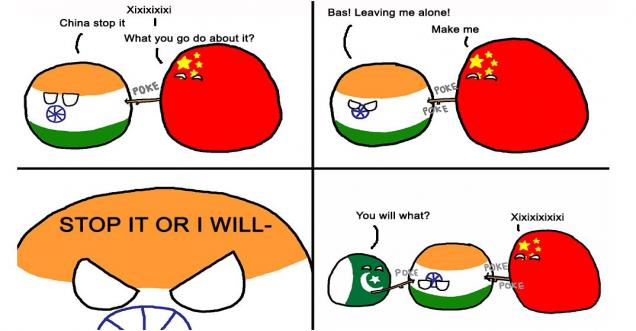 India: India is a great county, indeed it is the best country in the world. However when we compare it with china we may find somewhere lagging behind China, though not much far. China has been exporting its good’s and other materials across the world and No doubt the profit and money getting from exporting its product across the world is also helping china growing richer as well. Recently China also threatened India of facing with war if India did not settle the dispute. However we have still have a way to fight back to china with the help of GST, here is how.

However before reading further I would urge everyone, please stop buying Chinese products and share this news so that it reaches to all of India.

GST has made a complete arrangement to defeat China without fighting at the border. The biggest advantage of GST is that it will strengthen the small Indian economy devastated by Chinese goods and market will become stronger again.

China does not like by India's continuous growth across the world. China has made a new dispute on the border with India-Bhutan on Saturday. China issued a map and claimed the land of Sikkim sector, which has the rights to India and Bhutan. China has identified the triangular junction of Doka La and Dokalm in India-China-Bhutan on the map, claiming that under the 1890 British-China Treaty, this area comes under their jurisdiction. There is a standoff in this area from some time. In 2014, China had called Arunachal Pradesh and Jammu and Kashmir as its integral part. Then Vice-President Hamid Ansari visited China. India, while expressing strong reaction to this map of China, said that the reality does not change the ground reality by issuing a map.

To step up pressure on India, China stopped the way from Nathu La towards  Mansarovar on the pretext of bad weather and then demanded Army withdrawal from Sikkim region. On this India suspended the Nathu La Mansarovar Yatra. China has also been disturbed by the first meeting of Modi-Trump. This is the reason why the Chinese mouthpiece 'Global Times' has sharply criticized Modi-Trump's first meeting. But China's distraction did not stop here. China again warned India of reminding India of 1962, which Indian Defense Minister Arun Jaitley replied in clear words that China should not forget to understand the present India as a 1962 India.

GST will give a reply to China

The manner in which the GST was executed in the 1st July-midnight was phenomena; it is not only an excellent example of cooperative federalism in Indian, but also a hitting reply to China's aggressive attitude. Due to GST, India is going to give a major challenge to China without fighting a war at the border, which I am explaining further in detail how.

The concept of 'one nation, one tax' is the implementation of GST. On 15th of August, 1947, the country got freedom from the British rule, now on July 1, 2017; India got rid of the old 17 taxes and cesses from the Central Hall of the Parliament on the middle of the night. China has built excellent infrastructure on its border area, but due to lack of resources, there is lack of infrastructure in the Indian sector on the India-China border. But with the government's harsh attitude on the implementation of GST and black money, the government will now have adequate resources, which will give full attention to border management too.

The biggest advantage of GST is that it will strengthen the small Indian retailers devastated by Chinese goods and market again. GST is also getting a complete arrangement to defeat China without fighting at the border. Understand how and how it will be done carefully-

China's cheapest goods are shabbying the country's economy. In the last year, Deepawali also a movement was run in the India market for the boycott of Chinese goods in the country, despite import of Chinese goods, it is cheaper than domestic households and goods. The government has arranged to impose similar taxes on imported and domestic items to avoid this loot. After the GST is implemented, Chinese goods will no longer be cheap in comparison with Indian goods, which mean that China will not be able to break the backbone of the Indian businesses.

Similarly, the traders used to give information in CST while taking goods Interstate, but the goods did not go to another state, but was sold in the same state. In this way, the trader used to pay only 2% tax and by doing this they used to save 14% of the VAT from the state. Now this is not possible in GST. Now if the good has to go other state than you will have to pay the full tax of the good. According to the revenue secretary, at the rate of 2%, the revenue of the States will save at least 50-60 thousand crore, which will be used to re-create the nation.

From GST the country is moving forward towards a modern tax system which provides transparency with the opportunity to curb black money and corruption. The government has composed a maze for taking action against black money, hoarding, whose real door is GST. After the black money deposited abroad, the ban on cessation of cash disappearance has been abolished. The revolutionary results of connecting PAN with Aadhar will be visible in the future. In addition to this, the government has also given a major blow to corruption by amending the Benami law.

In this way, persistent harsh attitude towards black money will empower the nation, only then we will be able to pay proper attention to people's health, education, and infrastructure. If India wants to win the long-term battle with China then GST will majorly boost this opportunity for India.