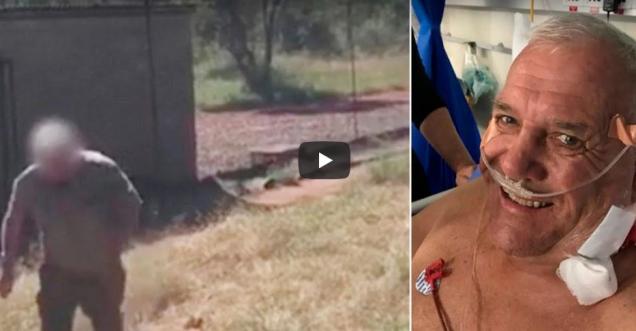 A Owner of a wildlife park in south Africa is in hospital after he was mauled by a lion whom he has raided as a cub. He suffered a few injuries, however looking at the attack video it was really tough to believe he survived.

The video footage viral on the social media is of Mike Hodge, 67 and the attack on him was at Marakele Animal Sanctuary in Thabazimbi area, Limpopo province. As can be seen in the video Mike Hodge went into the just a few steps when he saw the big cat running towards him, he tried to run away but was caught by the Big cat. People nearby can be seen screaming and shouting for his help, even people can be heard somebody get a rifle, just in case.

Mr Hodge set up the animal sanctuary with his wife, Chrissy Hodge, in 1999. Marakele Predator Park hosts a variety of predators and other animals, and offers a “Lion Mobile” vehicle experience to tourists where they enter the lion enclosure in a vehicle, and pictures on the website suggest that lions jump onto the vehicle which is covered in a cage.

The lion, called Shamba, was reportedly put down after the attack.

However there is a huge noise now after the death of the lion, as now days the percentage of commercialisation of caged big cats has increased.