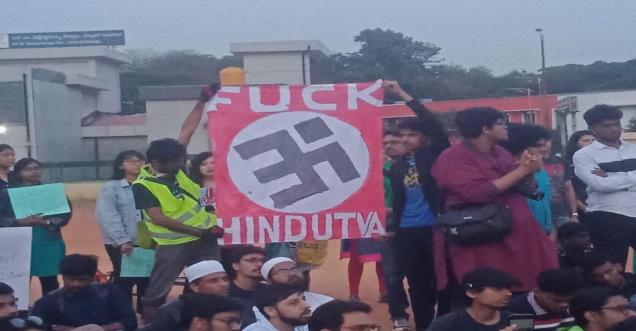 Soon after the Citizenship Amendment Bill (now an Act) was passed in the Upper House of the Parliament, the liberals in an epic meltdown had started comparing India to Nazi Germany.

The left-sponsored protests against the Citizenship (Amendment) Act, 2019 continue to rage in various parts of the country. While the anti-CAA lobby has been resorting to severe violence, stone pelting, vandalism, and arson to voice their dissent, a poster has emerged from a similar protest in Bengaluru, which not only goes on to hurt Hindu sentiments but also displays the protestors bigoted and obscurantist mindset by destroying the Hindu Om symbol.

In a picture shared by a Twitter user, a protestor in Bengaluru is seen holding a placard with a distorted image of a Hindu Om symbol (ॐ) to look like the Nazi swastika symbol. The poster also has a text message which reads: ‘F**k Hindutva’.

Aum or Om (in Devanagari ॐ) is one of the most sacred symbols in Hinduism. Hindus consider Aum to be the universal name of the Lord and that it surrounds all of creation. It is also said to represent the Hindu God, Ganesha, as the shape of the symbol loosely resembles his elephant form.

This is the hoarding of anti #CAA2019 protests in Bengaluru .. will ?@RahulGandhi? & ?@INCIndia? accept this ...? Time to draw a line .... pic.twitter.com/eToQSiyJQh

Hindus believe that the essence of the Vedas is enshrined in the word Aum. The belief that the Lord started creating the world after chanting “Aum” and “atha” gives this religious symbol a fundamental relevance to the Hindu view of creation. Hence, its sound is considered to create an auspicious beginning for any task that a Hindu may undertake.

Unquestionably, the protestors are not oblivious to this basic fact and have purposely distorted the symbol to hurt the Hindu sentiments. Nevertheless, this mealiness has also gone to display the inherent Hinduphobia these radicals have been nurturing and permeating.

However, this does not come as a complete shock considering these radicals were just taking the cue from their masters. Soon after the Citizenship Amendment Bill (now an Act) was passed in the Upper House of the Parliament, the liberals in an epic meltdown had started comparing India to Nazi Germany (the genocidal regime), that too for merely providing citizenship to persecuted minorities.

It may be noted that the Nazi Swastika, it is a distorted form of the ancient symbol Swastika, which is considered sacred in Hinduism, along with other Indic religions like Jainism, Buddhism, etc. The Nazi Swastika is just the Hindu Swastika rotated 45 degrees, and both look similar. Due to this reason, left-liberals often mock Hinduism by saying that the religion uses the Nazi symbol, ignoring the fact that the Nazi Party had stolen a symbol that is being used in Hinduism for thousands of years.

The dedicated agenda that liberals are spreading against the CAA only shows that facts and reason do not matter to them. It does not matter to them that the rules enshrined within the CAA have been supported even by the CPI(M) and the Congress in the past. When the agenda has been decided, circumstances will be force-fitted to suit the narrative. 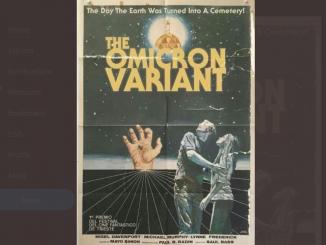