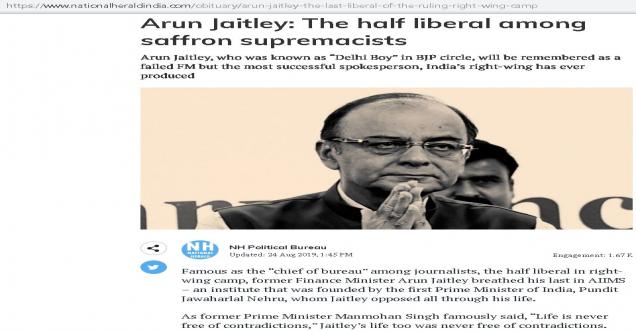 India: The congress mouthpiece National Herald gave a worst obituary to any person that has ever died. In a most cryptic and negative statement for any, while for many this was well liked obituary on Arun Jaitley.

The congress mouthpiece said, “Arun Jaitley, who was known as “Delhi Boy” in BJP circle, will be remembered as a failed FM but the most successful spokesperson, India’s right-wing has ever produced” . This is nothing more than slander against a person who is no more to defend himself.

The obituary is extremely insensitive and this is not the right time to rejoice someone’s death, who has been in the national politics and has been the finance minister of the nation.
The article writes and target Modi stating, “ it was Jaitley who saved Modi from the legal trap that followed the 2002 Gujarat riots. His appointment as the Finance Minister by Modi was seen as a quid pro quo gesture.” Really is this you think.

Another lines out of line, “As a Finance Minister, Jaitley would be remembered for failing the nation and surrendering in front of Modi’s whims to announce and implement demonetisation overnight, yet he would be considered better than the present FM Nirmala Sitharaman.”
The obituary  is entirely cooked and as a writer I have never seen such a obituary in my life. It has been written entirely to suid the people who hate BJP and all those who support the party.