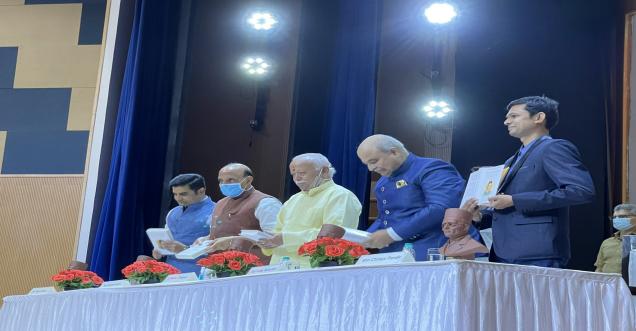 New Delhi: Rashtriya Swayamsevak Sangh (RSS) chief Mohan Bhagwat on Tuesday said that Hindutva is one; it already exists and will remain the same till the end. At the launch event of a book on Veer Savarkar, the RSS chief said, "Hindutva of Savarkar ji, Hindutva of Vivekananda, it has become a fashion to say so. Hindutva is one, it is already there and will remain so till the end. Seeing the situation, it was considered necessary to announce it loudly.

‘This book can be seen as a guide on how to fight divisive forces and help Bharat emerge as a strong and united nation , a prerequisite to Bharat realising its role as a Vishwaguru’ - Dr Mohan Bhagwat, Sarsanghchalak, RSS, on our book.
Pre book on Amazon https://t.co/9kd77vuhYG pic.twitter.com/bdu9s9hkiW

Bhagwat said Hindu families had “failed to teach children the value of one’s religion and tradition”. He said conversion of young Hindu girls and boys is wrong and that there is a need to instil pride in our own religion. We need to give them these values at our home.

Mohan Bhagwat said, “After all these years, now when we look at the situation, it comes to mind that there was a need to speak loudly if everyone had spoken then perhaps Partition (India-Pakistan Partition) would not have happened.” Along with this, Bhagwat said, "The security, prestige of the one who belongs to India is associated with India itself. After the partition, the Muslims who migrated from India to Pakistan do not have prestige even in Pakistan. What belongs to India that is India’s? It is." "After independence, the campaign to defame Savarkar went on very fast," Bhagwat said.

He said, "Right now there is always comments on Sangh and Savarkar but in the coming time the people will start saying things of Vivekananda, Dayanand and Swami Arvind." He said, "By connecting India, those whose shop is closed, they do not like it. Such a uniting idea is considered as religion. It is a uniting religion and not a system of worship. It is called the unity of the whole world. Savarkar called it Hindutva." "Syed Ahmed is called the father of Muslim discontent," he said.

How does conversion happen? How do our girls & boys convert to other religions? For small selfish reasons, for marriage. It’s another matter that those doing it are wrong. We don't prepare our children. We need to instill pride in ourself & our religion in them: RSS chief (10.10) pic.twitter.com/2aweGak2fv

Bhagwat said, "In history, there was Dara Shikoh, Akbar, but also Aurangzeb, who turned the wheel upside down." He said, "Shafaqullah Khan had said that after death I will take the next birth in India. The names of such people should be echoed. For those who belong to India, their security, prestige is attached to India, but for those who went to Pakistan after partition, their reputation is not there. Is." Bhagwat said, "Our nationality is the one that does not discriminate on the basis of worship and that is Hindu nationality, Savarkar had to say this when the turmoil of two countries arose."

Mohan Bhagwat said, "What doesn't happen in Parliament, just don't fight, everything else happens. But after coming out everyone drinks tea together and goes to each other's wedding. Here everyone is equal, so there is no need for separation of privilege. Don't talk." He said, “Suraksha neeti will chalega, Suraksha ki baat chalegi, but national policy will follow. Some people believe that after 2014, the era of Savarkar is coming, then this is correct. Everyone will have responsibility and participation. This is Hindutva. We are one. It's a good thing, but it doesn't mean that we are different."

Bhagwat said, "Savarkar was not an enemy of Muslims. He also has Urdu ghazals. Savarkar's main rear was from the wicked, so his language became like that." Mohan Bhagwat said, "Difference is natural. But even if we have different opinions, we will go together, there will be a debate. This is the basic element of our nationality. Those who do not know this, they are running and running a campaign to defame Savarkar. Those with petty intellects defame Savarkar, did the work of slander."

He said, “When Savarkar was there, Hindu society used to say (to Muslims) that you have your share in the duty and whatever is there is yours too. We are brothers to each other but the rituals are different, but we are one. All the countries All are sons of one Mother India, one cultural heritage. Hindu talks of Vasudhaiva Kutumbam."

"When the Hindus awaken, then the world will awaken," concluded the RSS chief. 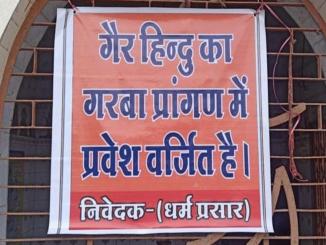