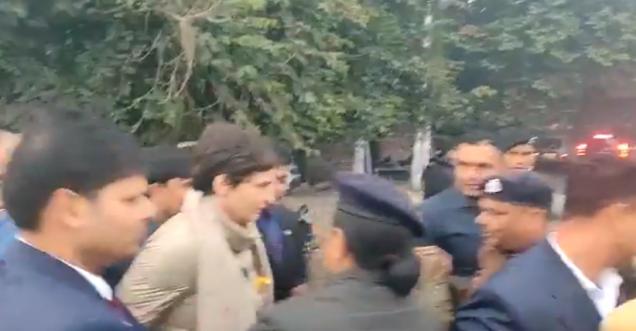 India: Recently Congress leader Priyanka Gandhi Vadra misled the public by making false claims that she was manhandled by police personnel on her way to the residence of a former IPS officer held for anti-CAA protests. She can be heard in the video below, “the lady police held her neck and pushed her to the ground. She has also alleged that she was held by her collar. She alleged that this happened twice”.

What the hell does Bisht wants to prove ?
How can the UP police manhandle @priyankagandhi ??
This is your respect for women @BJP4India ?#UPMeinGundaraj pic.twitter.com/iQw8jwKIrt

Cong releases video of @priyankagandhi : says she was manhandled by police pic.twitter.com/tgiaDUTgq5

In a letter addressed to the Additional Superintendent of Police (Protocol), Dr. Archana Singh, Circle Officer Modern Control Room, said, “A number of things such as manhandling and neck grabbing are being circulated on the social media, which is completely false. I have discharged my duty with full sincerity.”

We got instructions that Priyanka Vadra departed from the UP Congress office for Gokhale Marg. As the other vehicles of the fleet were moving on the scheduled route, the vehicle of Priyanka Gandhi instead moving on the scheduled route (from 1090 crossing) moved towards Lohia Path. At that point in time, I wanted to seek the details of her destination from the security point of view as to where she wanted to go. However, the party workers refused to share any information,” she said.

Shame on @priyankagandhi for labelling false allegations on a woman knowing very well the consequences and media harassment the honest cop might face.

From the video, it was clear that Priyanka pushed her #IStandWithArchanaSingh pic.twitter.com/LzNFj1pb1Y

Dr. Singh said that she is hurt by the allegations that she manhandled the Congress leader.