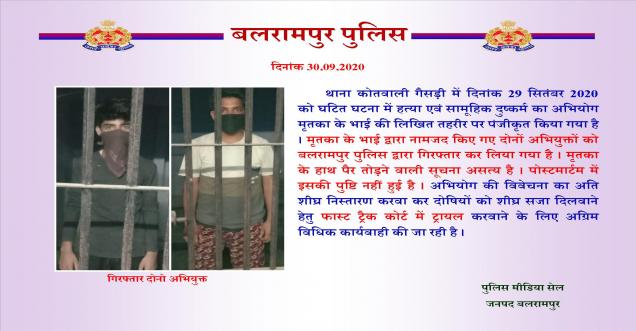 Lucknow: Rape has become a norm in the country, with a rising number of cases, especially in and around UP is not good. There is outrage in the country over the gang rape and ruthless killing of a Dalit girl in Hathras (Uttar Pradesh), meanwhile, another similar case has come out of the state's Balrampur district. About 500 km from Hathras, a 22-year-old poor Dalit woman was also gang-raped and then beaten up badly, leading to her death. This incident happened on the evening of Tuesday (29 September), when the country was focused on the death of Hathras' girl in Safdarjung, Delhi, and the police were engaged in taking her body away from her village.

The girl of Balrampur died when she was being brought to Lucknow Hospital for treatment. According to sources, the gang-rape has been confirmed in the post-mortem report. Sources also said that there were wounds and bruises on the victim's body in many places. The brother of the deceased woman has said that the police have arrested two people in this case, one of them is a minor.

The victim's mother told that she had left the house in the morning, when she did not return till evening, the police was informed about it. Sources said that she returned around 7 pm after the attackers had sent her to her home on an e-rickshaw. The girl was in a state of unconsciousness at that time. The family took him to the hospital. In the hospital, the doctor referred him to another hospital. She died on the way.

The victim's mother said, "The miscreants injected her with a narcotic substance that caused her to lose consciousness. Then they raped her ... They also broke her legs. The back of the body Also broke. A rickshaw-keeper brought her and threw her in front of our house. My baby girl could barely stand or speak. " He said, "My daughter said crying, save me anyhow, I don't want to die."

The woman had complained to the mother that there was a lot of burning and pain in her stomach. Local doctors said that his condition is critical. Advised to take her to Lucknow. But she died on the way. The police handed over his dead body to relatives, after which she was cremated on Wednesday.