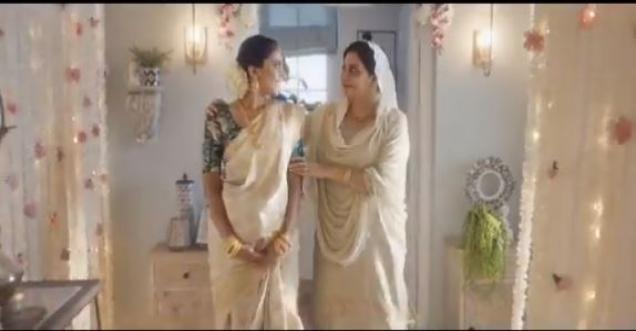 On Friday (October 9, 2020), a new promotional video of 'Tanishq Jewelry', which depicts a pregnant Hindu woman's ceremonial ritual in the Muslim family. In this video, it is shown that a woman laden with ornaments is getting ready for the ceremony of Godbharai. It is worth noting that in this video of 'Tanishq Jewelry', one couple shown is an interfaith couple, which means husband and wife are of a different religion.

This video, which came amidst several news reports of 'Love Jihad', shows the woman wearing a traditional sari, bindi, and jewelry. However, the other people in the family with him are Muslim. The elderly woman who is seen with her has not even put a dot. Family members are taking a Hindu woman laden with ornaments in the garden for a surprise. There are Deepmala in the background and there is also a statue of Nataraja. An attempt has been made to show the Muslim family as very 'tolerant'.

The Tanishq 'Love Jihad' ad that has now been taken down. Disgusting! pic.twitter.com/QuS1XBTVIO

Also, the elders of the Muslim family are also busy in decorating. A woman in the background says, "Relationships are new, threads are raw." Shall caress them with your strength, love will be threaded. They will add two ends, one will become a bond. " This video shows the entire Muslim family, where they are waiting in the garden to surprise the pregnant woman from the elderly to the children.

This sweet trap cost us our daughters. Until when this will contine in Secular India?

In the end, the woman asks her mother-in-law, "This ritual does not even happen in your house, does it?" To this, her mother-in-law responds to her, "But the ritual of keeping the daughter happy is not done in every household?" It has been talked about. However, it is worth noting that it shows that a Hindu woman is married in a Muslim family, where people are loving her a lot.

Ironically, this video came when 19-year-old Rahul Rajput was killed by his girlfriend’s brother Muhammad and Afroz in Adarsh ​​Nagar in Delhi simply because the two were in love. The teenager told that she kept saying that Rahul's health was bad, don't kill him - but he kept beating him. The teenager told that her brothers did not listen to her. Rahul was summoned by his brothers to meet the deception.