Lucknow: BJP MLA from Uttar Pradesh Suresh Tiwari has asked the people of Deoria district not to buy vegetables from Muslim vendors. 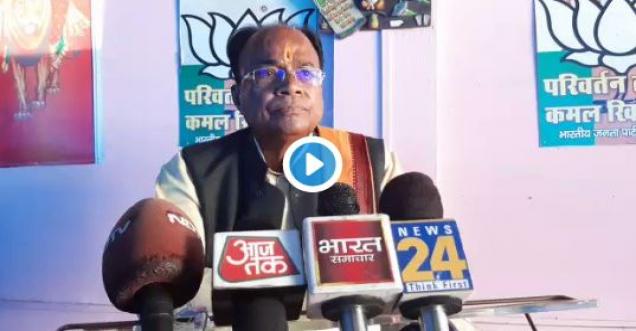 Lucknow: BJP MLA from Uttar Pradesh Suresh Tiwari has asked the people of Deoria district not to buy vegetables from Muslim vendors.

As per Indian Express, this comment of Suresh Tiwari, MLA from Barhaj assembly constituency of Deoria is being heard in a video viral on social media.

BJP supporters: “Sab Changa Si. There is no discrimination. Shame on US Commission for criticizing our dear Govt”

Dear @deoriapolice @Uppolice could you please tell us whether a criminal case has been registered against BJP MLA Suresh Tiwari for his suggestion that Muslim vegetable vendors be boycotted? (https://t.co/9Gdk9ms7M2) Thank you.

He was telling to some government officials, 'Keep one thing in mind, I am telling everyone openly, no one should buy vegetables from Muslims.' When contacted, Tiwari said that he the remarks were made during a visit to the office of Barhaj municipality last week, where several government officials were present.

He said, 'After hearing complaints that people of a particular community are selling vegetables contaminated with saliva for the purpose of spreading the coronavirus, I advised them not to buy vegetables from them… after the situation becomes normal they will see what they want

The MLA claimed that he only gave his advice and it is up to the people that they want to follow it. Giving the example of the Tablighi Jamaat Markaz, which took place in Nizamuddin, Delhi last month, Tiwari said, "Everyone can see what Jamaat members have done to the country." State BJP spokesperson Rakesh Tripathi said that the party does not support such statements. The party will take cognizance of the matter and ask Tiwari that under which circumstances he made such a comment.