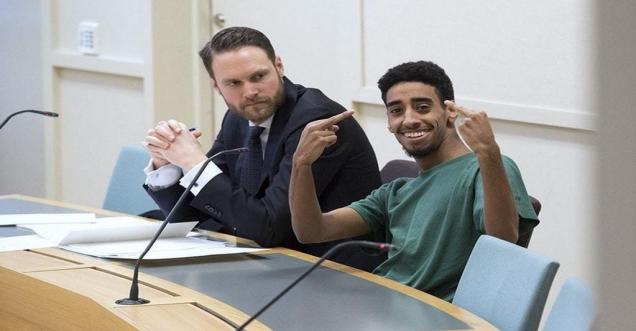 Viral Message: The hoax message claims a 25-year old man who was accused of murder a month ago, has walked free from court after the judge didn’t show up for 15 minutes.

Efrem Berry, a 25-year old man who was accused of murder a month ago, has walked free from court after the judge didn’t show up for 15 minutes and the man was legally allowed to leave.

Berry walked away from court yesterday after flipping off the entire jury present in the room. No one could do absolutely anything, because the judge Tyrone Allen broke the 15-minute rule, which states that if the judge is 15 minutes late, the accused is legally allowed to leave.

Even though he was accused of murdering a man last month, for reasons that remain unknown, he was still able to leave the room because the rules are the rules and this time he didn’t commit any crime.

This is a Hoax message, there is no such event happened, the man illustrated in the picture is 22-year old Fouad Saleh who was convicted for several murders in Sweden earlier this year. This picture of Swedish triple murderer at court.

8shit.net carries a disclaimer on its about page that reads:

It contains cutting edge satire on a diverse range of topics.

We also post crazy real news which often sounds too good to be true.

And an additional disclaimer in the footer of every page:

8Shit is a satire news and humor website. All its content is fiction (except those posts under the "serious" category) and shouldn't be taken as real. All references, names and marks or institutions in this website are used as contextual elements, like in any novel or science-fiction story.