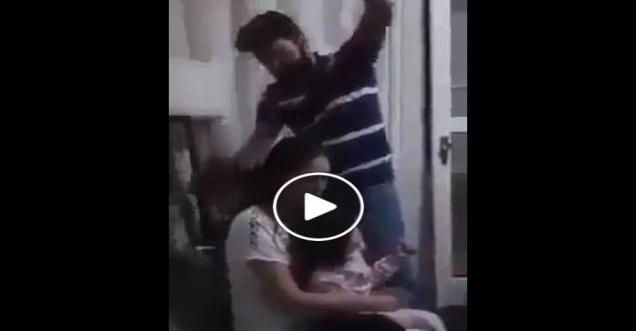 Brief Outline: A Wrong video is being shared on the social media claiming what can happen to a women who does not wear Burqa.

What is Viral in India:

Facts Check Analysis: The story viral across the world of a husband cutting off wife’s hair and abusing.

The alleged husband in the video gained instant notoriety straight after being shared by the facebook users Social media and being portrayed as a Pakistani husband who is ‘oppressing’ his wife for bringing disgrace to his ‘shame’ and honour. However she is not Pakistani.

The alleged incident didn’t take place in Pakistan or in India; the couple is actually from Brazil.

Translated: After being betrayed by the wife man posted video on network of relationship, showing the moment that, by revenge, he cuts the wife's hair. It turns out that the woman betrayed him with his own nephew and he wanted to end his beauty and give him a lesson.
During the video the couple's small daughter, on her mother's lap, is notoriously desperate to see the scene. "Stop cutting Mummy's hair, Daddy," the little girl kept repeating while her mother stood still, totally unresponsive.
In the comments of the video, many judged the boy and said it was his wife's gift to the beautiful pair of horns. Of course she betrayed, also such a …., even me.
Others (mostly men) used the speech "You have to suffer even, she is a slu.. and deserved."
And what did you think of the fact? What would you do in this situation? I found it absurd, after all, this does not erase horn and nothing justifies an act of this nature, even more in front of a child, there is only one version for his madness, "horn hairdresser".

So this video is not related to any religious angle, however it is a crime on women.