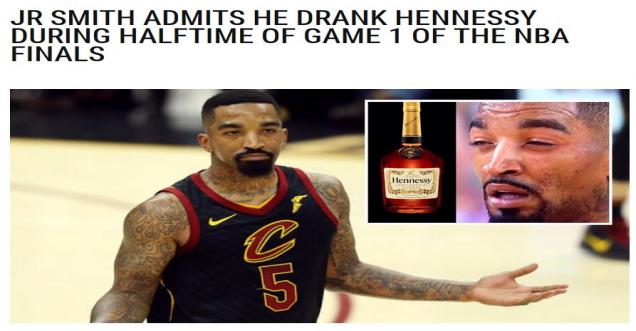 Brief Outline: A post claims that Jr smith admitted that he was slightly drunk during the second half and overtime of the Game 1 of the NBA Finals between the Cleveland Cavaliers and the Golden State Warriors is fake.

Days after the controversial Game 1 of the NBA Finals between the Cleveland Cavaliers and the Golden State Warriors, Cavs guard Jr smith admitted that he was slightly drunk during the second half and overtime.

“I was drunk as hell y’all i’m sorry, I wanna say sorry to the fans and Lebron, that henny go crazy and i thought hennything was possible”, said JR smith to reporters on Saturday. Jr Smith was apparently drinking Hennessy cognac during halftime, a drink that Jr Smith is apparently known for liking.

Although Jr Smith is incredibly stupid for getting tipsy during Game 1 of the NBA Finals, we have to admit that we’re slightly relieved that Jr was tipsy. “Would’ve been a lot worse if he wasn’t drinking” said Cavs coach Tyrone Lue who also already forgave Jr Smith, “If he was sober and that stupid, then we would have a problem”.

Detailed Analysis: As per the news posted it claims that Jr Smith admit to drinking Hennessy cognac during the halftime of an NBA finals game, however we did not find any proof to verify this claim.

As per J.R. Smith, he was already sure of the outcome of the game and he was not drunk even. J.R. Smith changed his game from Games 1 and 2.

JR Smith on whether or not he knew the score at the end of regulation: “After thinking about a lot the last 24 hours…I can’t say I was sure of anything at that point”, Smith said.

JR Smith on whether or not he knew the score at the end of regulation:

“After thinking about a lot the last 24 hours…I can’t say I was sure of anything at that point” pic.twitter.com/FJovbweZFz

JR Smith was asked if he told LeBron he thought the #Cavs were up at the end of regulation in game 1:

If still have doubts read more below link

J.R. Smith backtracks on mindset at end of Game 1: 'I can't say I was sure of anything at that point'

Game 2 of the NBA Finals cannot come quick enough for J.R. Smith. His now-infamous blunder of running out the clock with the game tied instead of giving the Cleveland Cavaliers a chance to take the lead over the Golden State Warriors at the end of regulation in Game 1 is the story that won't quit.

The news was originally posted in a satire website the Huzlers on june 3, 2018 titled Jr Smith Admits He Drank Hennessy During Halftime Of Game 1 Of The NBA Finals (archive here).

Huzlers styles itself as a "fauxtire" website and carries a disclaimer at the bottom of each page:

Huzlers.com is the most infamous fauxtire & satire entertainment website in the world. If it's trending on social media you'll find it here!

As per splinternews the site is run by who calls itself fauxtire.