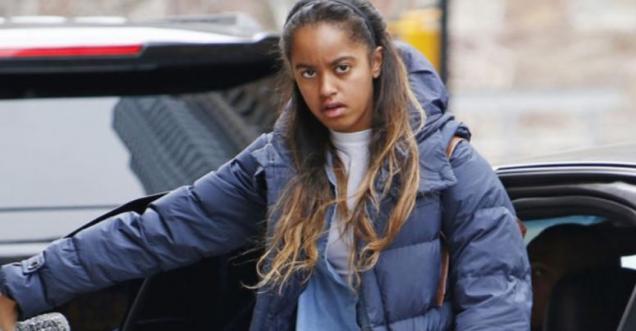 Brief Outline: The viral message by dailyworldupdate claims that Malia Obama was suspended after her racial speech, A World Without Whites.

“White people are so 1960’s. Sometimes the only thing that keeps me going is the fact that they will be blended out by the time I am 30,” a recording of Obama’s speech shared on Snapchat said. “Imagine a world without white people.” Obama was of course referring to the scientific belief that if whites continue to breed at low rates in America while others races continue to breed at current rates, white babies will be virtually nonexistent in our country by 2038.

Detailed Analysis: Till date there has not been single news to verify this claim, apart from some some facebook promotions on the same message. Neither did we find Harvard Dean Cain Markholder as claimed in the viral message.

Daily World Update comes with a clear satire disclaimer at the bottom of each article:

sat·ire ~ˈsaˌtī(ə)r
noun
the use of humor, irony, exaggeration, OR ridicule to expose and criticize people's stupidity or vices, particularly in the context of contemporary politics and other topical issues.
If you disagree with the definition of satire or have decided it is synonymous with "comedy," you should really just move along.