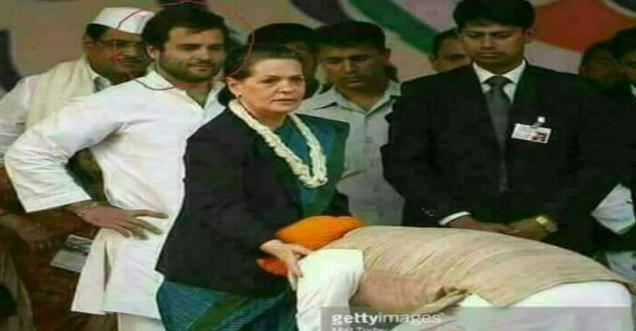 Viral Message: An old image of Sonia Gandhi and purportedly saying Manmohan Singh, the Ex-Prime Minister touching his feet is going viral over the social media.

Viral Message Verification:- An old photo doing the rounds again on social media claims to show ex  PM Manmohan Singh touching the feet of Congress President Sonia Gandhi. This is a fake image. The man in the shown photo is a Congress representative and not Manmohan Singh.

This is a image of a Congress representative touching the feet of Sonia Gandhi, as Rahul Gandhi looks on during the Indian Youth Congress's national level convention of Elected Office Bearers in New Delhi on Tuesday.

This is an image taken from GettyImages. To reconfirm this is not the image of Manmohan Singh, this is some congress representative touching the feet of Sonia Gandhi.