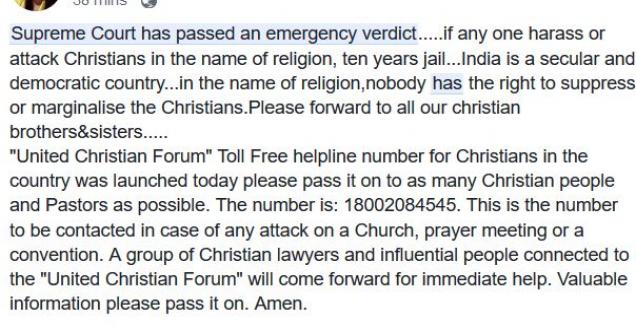 Brief Outline: A viral message claims that If any one harass or attack Christians in the name of religion, ten years jail, India is a secular and democratic country

Supreme Court has passed an emergency verdict.....if any one harass or attack Christians in the name of religion, ten years jail...India is a secular and democratic country...in the name of religion,nobody has the right to suppress or marginalise the Christians.Please forward to all our christian brothers&sisters.....
"United Christian Forum" Toll Free helpline number for Christians in the country was launched today please pass it on to as many Christian people and Pastors as possible. ☎ The number is: 18002084545. This is the number to be contacted in case of any attack on a Church, prayer meeting or a convention. A group of Christian lawyers and influential people connected to the "United Christian Forum" will come forward for immediate help. Valuable information please pass it on. Amen.

Facts Check Analysis: The viral message on the social media is fake as Supreme Court has not passed any such recent law.

on or attacks upon the religion, race, place of birth, residence, language etc of any particular group or class or upon the founders and prophets of a religion. The jurisdiction of this Section is widened so as to make promotion of disharmony, enmity or feelings of hatred or ill-will between different religious, racial, language or regional groups or castes or communities punishable. Offence on moral turpitude is also covered in this section.

The offence is a cognizable offence and the punishment for the same may extend to three years, or with fine, or with both.  However, the punishment of the offence committed in a place of worship is enhanced up to five years and fine.

Ingredients of Section 153A:

 The act of promoting enmity between different groups on grounds of religion, race, place of birth, residence, language, caste, community or any other group.

Acts prejudicial to the maintenance of harmony between different groups or castes or  communities, if the acts disturb public tranquility.

Acts causing fear or alarm or a feeling of insecurity among members of any religious, racial, language or regional group or caste or community by use of criminal force or violence against them.

Section 295 of the I.P.C makes destruction, damage, or defilement of a place of worship or an object held sacred, with intent to insult the religion of a class of persons, punishable with imprisonment which may extend to two years, or with fine , or with both. This section has been enacted to compel people to respect the religious susceptibilities of persons of different religious persuasion or creeds.

 The accused must do such  an act with the intention of insulting the religion of any person, or

with the knowledge that any class of person is likely to consider such destruction, damage or defilement as an insult to their religion.

 The accused must destroy , damage or defile any place of worship or any object which is held as sacred by any class of persons.

Ingredients of Section 295-A:

The accused must insult or attempt to insult the religion or religious beliefs of any class of citizens of India.

The said insult must be with a deliberate and malicious intention of outraging the religious feelings of the said class of citizens.

The said insult must be by words,  either spoken or written, by signs or by visible representation or otherwise.

 The offence under Section 295-A is cognizable and a non-bailableand non-compoundable offence.

 The police have a power under to arrest a person charged under Section 295- A without a warrant.

The first part of the message is fake, however as per the United Christian Forum, the second information from the viral message is true.

Why do India's Christians need a dedicated "persecution" helpline?: http://t.co/vJy7gtLLYq via @YouTube