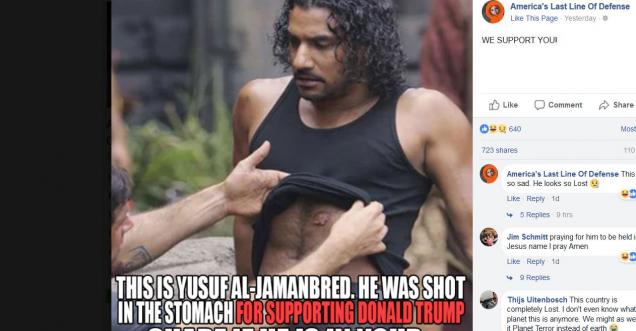 Brief Outline: The viral message claims that Yusuf AL-Jamanbred, was shot in the stomach for supporting Donald trump is a fake news.

Fake News on social media: This is Yusuf AL-Jamanbred, he was shot in the stomach for supporting Donald trump. Share if he is in your thoughts and prayers.

Detailed Analysis: A facebook post shared by America's Last Line Of Defense (archived here) on 27th May, 2018 is hoax and not true at all.

Actually the picture is taken from a screenshot from a TV series Lost where character Sayid Jarrah (real name Naveen Andrews) has some wounds examined.

Naveen Andrews was a teenage dropout, an alcoholic and a heroin user who fathered a child with his maths teacher.

About
Nothing on this page is real. It is a collection of the satirical whimsies of liberal trolls masquerading as conservatives. You have been warned.

Impressum
Use the force and the truth shall reveal itself. Just not here. Ever.

Products
Good Old Fashioned Liberal Troll Provided Fantasy presented as comedy to the left and a social experiment to the right. Please don't hurt the Trumpanzees. they'll be gone in a few years back to the shadows from whence they came and we'll be back to trolling Tea Turds. 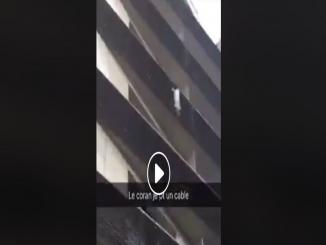 Video: Real Life Spiderman, Gassama pulling himself up on balcony